Whit Stillman is an elusive film maker. He enjoyed upscale indie success with Metropolitan (earning an Oscar nom for screenplay), Barcelona and then Last Days of Disco in 1998, before disappearing a bit.

He came back with Damsels in Distress in 2012 and now confirms his re-emergence with the witty Jane Austen piece Love and Friendship, starring a career-best turn from Kate Beckinsale as Lady Susan, a schemer and a survivor, getting the best for herself in the late 18th century. 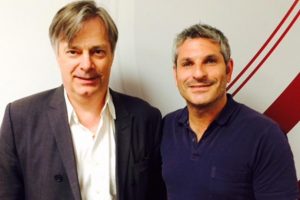 Whit Stillman and myself

She’s aided by her best friend, played by Chloe Savigny, and the general dimness of the wealthy menfolk whom she can run rings of banter around.

It’s a curious, amiable film, part comedy sketch, part Austen homage and all performed and directed with elegance and economy by Stillman.

It was a pleasure to catch up with Whit just after my BBC Radio London show to find out how he did it, and what he’s up to next…