When was the last new movement in British cinema? I don’t mean a bowel movement, like all those Lock, Stock imitators scraped from the smoking barrel of the late 1990s but a real cinematic trend heralding a flurry of new directors and new style?

My fear is that you have to go back to the British New Wave of the 1960s to discern any such “movement” in our domestic cinema. A new restoration of Bryan Forbes’ The L-Shaped Room (1962) playing at the BFI London Film Festival reminded of that, with its dingy Notting Hill lodging house and Bafta-winning performance by Leslie Caron as the pregnant young French woman come to have her illegitimate baby in secret.

The Sixties was also mythologised at the festival by Michael Caine starring in, narrating and producing the documentary My Generation, featuring a likely array of swingers and scoundrels, from David Bailey and Paul McCartney to Marianne Faithfull and Mary Quant, all looking back on the days when they broke the rules and the moulds.

It’s a fond compendium of memories, mini-skirts and mods, with music and archive footage one has seen and heard many times before, but director David Batty (not the former England penalty misser) stitches it all together as nattily as a Doug Hayward suit, discerning a narrative of teenage rebellion and a flourishing of ideas until, the moral posits, drugs brought about the movement’s swift end. You Can’t Always Get What You Want, indeed.

Such re-purposed nostalgia, however, inspired me to seek a similar energy – or synergy- in the 37 new British films playing at this year’s festival. After all, it’s a BFI festival and the BFI are now one of the country’s major producers, championing and nurturing new voices. Could it be that under their umbrella and along their red carpets, a new generation of British film makers are emerging together, with similar styles and themes in their work, shaped by our fractured times and the joined-up thinking of our new generation film executives? 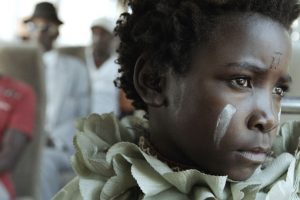 The three directors put forward for the £50,000 IWC Film Maker Bursary which kicked off the LFF this week were certainly distinctive. Daniel Kokatajlo’s Apostasy, Rungano Nyoni’s extraordinary Zambia-set I Am Not A Witch. and from another far-flung corner was Beast, directed by Michael Pearce, and set on his native Jersey, with its fine turn from rising star Jessie Buckley – I’ve mentioned them all previously and all three have the detachment of “outsider” movies, but being part of the LFF now brings them into the bosom of the Brit film establishment. Maintaining distance is often hard. Very quickly, British film makers become absorbed by middling costume dramas on small budgets which aren’t enough to truly propel them forward and succeed in merely rubbing off the rough edges that made them distinctive in the first place.

Saul Dibb – who went from Bullet Boy to The Duchess in his early career – returned to the festival with an adaptation of R C Sherriff’s classroom classic of the trenches, Journey’s End (featured image) and, thankfully, dodged those British film industry bullets. The film deserves attention for its balance of classicism with an injection of energy and timeliness. A doughty ensemble cast includes Asa Butterfield as the naive young Raleigh eager to serve, Sam Claflin (an actor to whom I’ve never particularly warmed until now) as depressed drunk Stanhope and an excellent Paul Bettany inhabiting the role of Osborne as if he was born to play it.

Toby Jones’ cook Mason lends a matter-of-factness that becomes almost comic given the impending doom and it’s the downplayed British stoicism that gives this version its emotional heart, and its tears.  There’s a chilling suggestion that, in this to and fro of class and camaraderie, we are little changed in the 100 years since.

Paddy Considine’s Journeyman starred the actor himself, also directing and writing the follow-up to his tough-watch debut Tyrannosaur. Considine plays middleweight boxer Matty Burton, mentally and physically injured in his brutal final fight and now battling through rehabilitation of his entire soul for the sake of his wife Emma (a powerful Jodie Whittaker) and baby daughter Mia.

Hollywood would have unleashed the full string section on this one, but Considine is made of sterner stuff and channels the emotion into a performance in which you can feel the pain and the restraint itching to burst out. The film doesn’t have Tyrannosaur’s grim power but it does have a different, more tender touch. Jodie’s terrific and there are some moments of brutally-observed truth, about class, money, success and friendship. I cried. Twice.

War, pop, class struggle, defiance and eccentric humour – all British life is here in the current crop. Perhaps it’s adaptability and universality that marks British film out now, the ability to tell stories from Africa, Jersey and Manchester, to work globally and, in America, to win Oscars, which Martin McDonagh’s fire-cracker screenplay for Closing Night film Three Billboards Outside Ebbing, Missouri must be a favourite to do.

Of course to limit oneself to British entries at the LFF would be restrictive and probably rather depressing. French debut film Ava, by Lea Mysius, is one of the more striking things I’ve seen, a sensuous, daring piece about 13-year-old Ava (Noee Abita) having nightmares about losing her sight, then running away with a dangerous gypsy boy and his big black dog while on summer holiday on one of those wild, sexy Atlantic coast beaches.

Jeune Femme, set in Paris, felt overly-contrived to me, the mannered performance of its lead Laetitia Dosch as reeling 20-something Paula getting in the way of my giving two centimes about her. 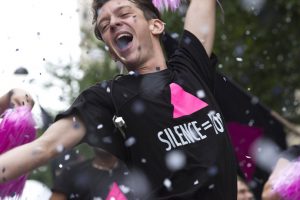 I was beguiled by German-Israeli romantic comedy The Cakemaker, in which a gay German baker arrives in Jerusalem to confront the wife (Sarah Adler) of the man he secretly loved. Soon, his delicious but non-kosher cakes and cookies stir her world around – creating quite the Beth Din, one might say – and things then get emotionally very weird.

The best film at this LFF – and the one that should win the Official Competition when it all ends next weekend – is 120 BPM, by France’s Robin Campillo, a brilliant recreation of the formation of Paris AIDS activist group ACT UP in the early 1990s. It should have won the Palme d’Or at Cannes last May, but at least the LFF provides such astoundingly good films with a second chance. It’s also now officially France’s Oscar entry, and I would fancy its chances in Hollywood next year, too.

When the films come so thickly, you start to join the dots in front of your eyes. I saw two films featuring a boy and a girl riding a motorbike with a large animal sandwiched between them: the aforementioned Ava and, a rewarding if random pick, Colombian island charmer Bad Lucky Goat. What can it mean? Probably that I’ve seen too many movies. But that’s what festivals are for – and this one’s just getting going.