I was down at BFI Southbank for the launch of what looks like being their latest blockbuster collaboration.

It’s a whole year of UK India cross culture, of course not just encompassing film, but theatre, dance, music and literature. But it’s the film stuff that got me excited.

The news to me was seeing Anoushka Shankar down there, announcing that she’s been commissioned to compose a new score to the restoration of Indian silent movie Shiraz, a 17th century love story made in 1928 and set around the building of the Taj Mahal. 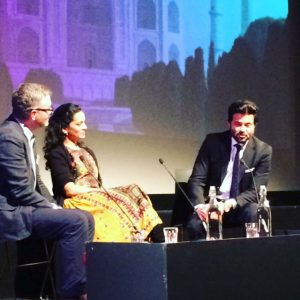 Anoushka will be performing her score there, in the shadow of the iconic palace, at what will be surely one of the most impactful and romantic screenings anywhere in the world next year. Not sure we’ll all get tickets to that one, but fear not: she’ll be repeating the feat at the only-slightly-less-romantic Barbican as the Archive Gala of the BFI London Film Festival on October 14.

From the restored footage curator Robin Baker showed, it looks magnificent and I’m sure Anoushka’s score will rise to the occasion. She promised a mix of Indian and Western instruments and musicians, as is her signature style, but that she would also remain faithful to her classical Indian roots and try to recreate the music of the period, too.

Robin Baker also revealed that there would be complete restorations of Satyajit Ray’s Apu trilogy showing at BFI this summer, for which her later father Ravi Shankar wrote the music scores. What I didn’t know, as Anoushka revealed, was that her father wrote the hugely influential and admired score to the first film Pather Panchali (1955) in one night, over eight hours, composing to the scenes that Ray screened to him as they went along.

Also on show were brief buy beautiful and amazing clips from the BFI National Archive. They’ve been busy digitising nearly 300 new films that were shot in India during the early 20th Century, including the oldest surviving footage of India on film from 1899 – travelogues, documentaries and home movies. These films, from 1899 up to partition in 1947 include scenes of rural and urban life, of rich Maharajahs on elephants and poor farmers in fields, as well remnants of British rule and teeming crowd scenes, from a remarkable breadth and legnth of the country, from deserts to mountain forests.

“We don’t know many of the locations,” said Robin Baker, “but we are hoping that by making the films available to Indian audiences for the first time, we will receive new clues and information about where some of the footage was shot.”

The collection, which will be called Around India With A Movie Camera, will be available both as a feature length highlights programme and available to view for free on the BFI Player.

Also present was Slumdog Millionaire star Anil Kapoor, his hair magnificently bouffant as ever. “I’d never heard of Danny Boyle,” he recounted. “I knew The Beach because it starred Leonardo di Caprio, but I’m a mainstream guy. It was my son who knew Danny’s work because I’d bought him a Trainspotting poster many years before on a visit to London, but I had no interest in the director at that time. It was he who read the script before me and urged me to do Slumdog. But it was one of the great experiecnes, obviously, and Danny is a great human being, a priest, really, a priest.”

I’m looking forward to the season, the year, already, and the excitement, exotic colours and the enthusiasm for cinema this new Indian initiative will bring down to BFI Southbank and around the UK.