What a pleasure and thrill it was to host the Robert Elms Show on BBC Radio London over the last two weeks.

I really miss it today, not getting up to play music and talk to so many different representatives of our great city, from the celebrities to the unsung Londoners doing great work, to the audience who ring in.

If I had highlights over the 13 shows I presented, they were difficult to separate out from the whole, three-hour experience of doing it every day, picking the music, mixing it with the station’s playlist and keeping the regular audience happy and engaged. 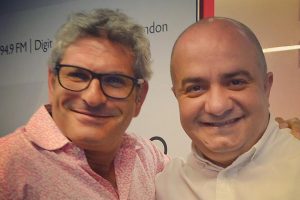 Imad, the Syrian chef who’d escaped Damascus where he was a restaurateur, and journeyed to London, with his family, to go on and open a delicious pop-up restaurant on Colombia Road. His refugee story was enlightening and inspiring as well as very touching.

Tim Spall (featured image), who was a brilliant Listed Londoner, answering the 15 questions with wit and a delight in his own Dickensian appreciation of London. He inhabited his answers, rolled them around his head and his tongue and practically acted out his peregrinations for me. 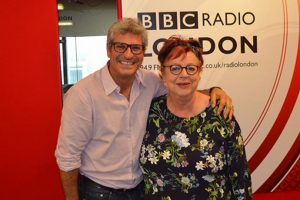 Jo Brand was a joy, talking about her first movie, The More I Ignore You, and the ravages of mental health on a family.

I loved the day we were Round Your Manor in Forest Hill which, through out guests, callers, the Horniman’s Museum and  the redoubtable Maxwell Hutchinson in situ, really came to life with exciting stories, buildings, characters and a sense of community.

Funky Friday with my old friend Nick Callow was a real laugh, with Nick coming straight from the airport with his luggage fresh from the World Cup – he was From Russia with Funk… and we had a right old dual of funk, a penalty shoot-out that needed VAR as he laid down some Michael Jackson some Mr Big Stuff and kicked off with the Pasadenas’ Tribute (Right On). I responded with Jackson 5, Linda Clifford and Indeep. 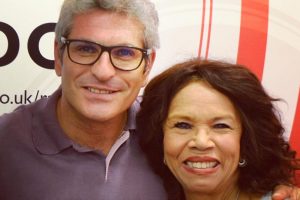 Candi Staton was a thrill, giving me a live rendition of Peace, Love and Understanding and regaling us with stories of her start back at Muscle Shoals studios and how the UK had kept her soul career moving through the generations, which included me playing house anthem You Got The Love.

I also loved talking with Roger and John Taylor from Duran Duran, doing Whitney Houston as a Fourfer and chatting about the history of international football strips with John Devlin. Novelist Ben Okri was a wonderfully eloquent and evocative voice and then Sanjeev Bhaskar and Nicola Walker were a terrific double act talking about their new series of Unforgotten. 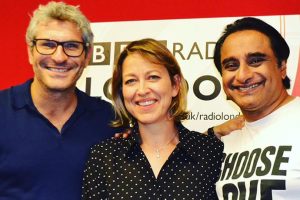 The two Saturday shows were special in their own right, with one bouncing to the lilt of some reggae classics (UpTown Top Ranking, Aswad) while we talked to guests at a Windrush celebration on the South Bank and another celebrating Pride, with reports from along the route and tunes from Kylie, Bronksi Beat, Diana Ross and Lykke Li.

But perhaps my favourite moment of the lot was in the Saturday morning Family Favourite slot, when a chap rang in – Dave from Charlton, if I remember rightly – requesting Chattanoogie Shoe Shine Boy,  a Red Foley song from 1950 which he said reminded him of his Dad dancing in the kitchen with his Mum on a Sunday morning to the family radiogram. We discovered he hadn’t heard the song in many years and didn’t possess a copy, so we really made his day by playing it and you could feel the emotion as I let him introduce it himself. It was just lovely. 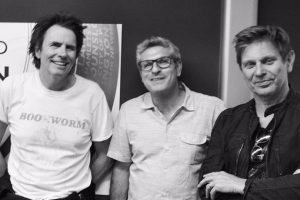