There was a Welcome party on the Majestic Beach, but it’s a literally a free-for-all and got a bit messy, plus there was terrible music from a wedding band.

Still, there was rose and cheese, and even a fish bbq on the pier which meant plumes of smoke drifted over the bay and made everyone smell like a kebab. I pushed in the queue and got some fish for me and Wendy Ide, but my slick move backfired when, taking my spoils quickly, I realised on biting into it, the sea bass was still raw. 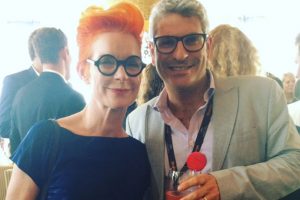 Me and Sandy Powell

Celebs don’t tend to bother with this shindig, but I did manage to bump into Sandy Powell there who was wandering round a bit lost, way too stylish for this kind of mass buffet brawl. She did invite me to her more exclusive event the next day – I’d forgotten of course she’d be doing the costumes for Wonderstruck.

So, I show up at her party the next evening. Turns out Sandy was also exec producing the film. “I read the book, just flicking through it, at the writer Brian Selznick’s house in San Francisco. We become great friends on Hugo (Scorsese’s adaptation of Selznick’s book) and I said to Brian that this one would also be a great movie. He went off and wrote the script and I waited for just the right moment to give it to Todd, because I know he can only concentrate on one thing at a time, and, here we are. So that’s why I’m the exec producer.”

Sandy also did the costumes, which look great, particularly in the 70s section. “I used Midnight Cowboy as my main reference, “ she said. However, she also told me how hard it is to cast 70s street scenes with extras these days as everyone’s gotten so fat or so gym toned. Gone are those lithe, slender frames – male and female – that used to fit into shorts and long socks with a skinny grace. “I must have seen a 1000 extras,” she said, “and turned so many away for not looking right. I got really involved in that – they’re my favourite bits of the movie.”

Stephen Woolley was also down on Nikki Beach to congratulate his Carol collaborator Sandy. Julianne Moore looked fabulous in feathers and Michelle Williams was there with her great elfin platinum hair. She’s only in the movie for a bit, as the boy’s Mum. I realised she’s getting away very nicely with only being in films for a bit these days – Manchester by the Sea, even that Kelly Richard one, Certain Women, just for a segment. When’s Michelle Williams going to be arsed to to more than a couple of days on a movie?

I left when the cute kid from the movie started break dancing on the bar to wild whoops from the Nikki Beach staff. Cannes had begun.

Although I wasn’t finished, and popped into the Marche party back on the Majestic – much better buffet for the buyers and sellers than the grotty old journos. My friend Lucy Walker was there, resplendent in her dress as she’s on the little-known documentary Jury, L’Oeil D’or. 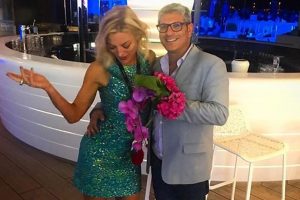 Lucy Walker and some flowers at the Marché party

She told me what a crappy time she’s been having with her much-awaited Buena Vista Social Club sequel, which was pulled from Sundance earlier in the year. All a bit of nightmare from the sound of it, music rights, production company and distributor issues and final cut shenanigans. And now it’s coming out in the US this week (May 26), and Lucy’s not even there to support it – though she has the best excuse, of course.

Oh dear. I was really hoping this would launch Lucy into the big time, not that she’s not huge already and certainly doesn’t lack for confidence in that regard, with a couple of Oscar noms and a Cannes berth a few years back for Countdown to Zero, as well my wedding video, shot 10 years ago exactly (I want a 10th anniversary director’s cut, please).

But this is such a big doc brand that, released right, it would surely be her biggest ever audience, and Lucy’s always had a great feeling for music and its people, which this film is all about.

I hope they sort it all out – it still looks good from the trailer (above) but Lucy also suggested the title, Buena Vista Social Club: Adios wasn’t her first choice. Who’d be a film maker, eh?

Good party luck continued the next night when I got a cheeky pass into the Okja party. I hadn’t realised it would be quite so intimate at the Netflix Hub, but there was the whole cast, including Jake Gyllenhaal, Lily James, Paul Dano, the supercool Giancarlo Esposito, who I can confirm is a top geezer. He’s angling for spin-off show for his character Gus from Breaking Bad, he tells me. 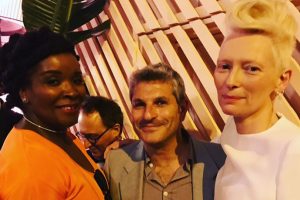 And then there was Tilda, her maj herself, resplendent in white and wearing one killer ear-ring that she said was worth so much money it could fund a few movies. Tilda is awesome as we know and was on great form, really proud of execing Okja into life. We talked long into the evening, about docs and upcoming stuff – she revealed she’s curating the cinema tent at Glastonbury this year, and Okja will be there to blow some fragile festival minds once more, as will Don’t Look Now.

Writer Jon Ronson was there, too. He lives in New York now. We had a good old natter and a kvetsch. He told me how surprised he was when Bong Joon Ho contacted him to write Okja, having seen the movie Frank that Jon wrote and was partly based on his experiences in a band. “I was amazed he’d seen that and still have no idea what he saw in it to want me, but I’m glad he did – it’s been an unusually pleasurable experience.”