Another great afternoon at the Barbican on Saturday, where they were getting ready for the arrival of Bond this week. I think Woody’s films and the Bonds are the only two regularly occurring “franchises” to which I actually look forward, of which I’m a fan as well as a professional critic. 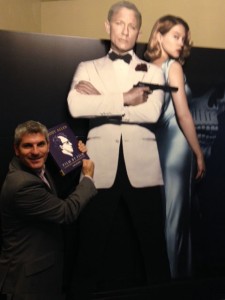 This time it was just me and my Woody clips taking on the might of Spectre. I took a very generous and warm audience through some of my favourite Woody moments, interwoven with my thoughts on him and my personal journey writing the new book.

Then we all sat down to watch The Purple Rose of Cairo on a beautiful original print. It’s a film about nostalgia and going to see the movies during the afternoon, so it was the perfect matinee. And Gordon Willis’ photography, which switches between the black and white splendour of the titular film playing within the film, and the faded yet wintry hues of Depression-era New Jersey, where Mia Farrow’s waitress can only find solace by disappearing into the movies. Literally.

I’d seen the film recently again but as soon as it started playing, I just had to watch it all again. The Purple Rose was actually the first Woody film I caught on the big screen, in 1985, at what was then the Screen on the Hill in Belsize Park, opposite my Dad’s old hairdressing salon.

I’d work in the salon quite often and gaze across at the cinema and watch them change the letters on the big sign outside, just like Cecilia does at the Jewel theatre.

It’s a gem of a film, it really is. The pastiche of old Hollywood – the film’s producer is called Raoul Hirsch, echoing real-life figures like Raoul Walsh – is delicious, exactly the world Woody used to disappear into in the Brooklyn movie houses of his youth, a “white telephone” world, he used to call it.

Mia is so fabulous in this film. I do think it’s her best performance, so fragile yet also developing steel as she goes. She’s shatterproof by the end of all this and it’s one of Woody’s most debatable endings – is it sad or happy? I think we have to imagine Cecilia happy as she gazes once again at the movie screen. 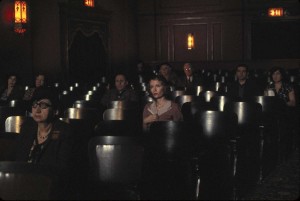 The ending is so wonderful – first we see Jeff Daniels’ Gil Shepherd alone on the plane back to Hollywood, then we see Cecilia alone in the dark of the cinema, with only Fred n Ginger for company. Neither of the lead characters utters a word, but their respective isolation and faces say everything.

Thanks for everyone who turned up – a few of you for the second time – and it was great to meet so many of you and sign the books afterwards. The film left everyone with a warm glow, a tingle of charmed humour. And it made me cry a little bit too, partly with the sheer pleasure of watching such a fabulous film, partly with pride at showing it to many people there for the first time, and partly because I now feel emotionally invested in Woody’s oeuvre. Like Cecilia, I disappear into his world every time I open the book pages or have another screening. And I’m very happy about that.