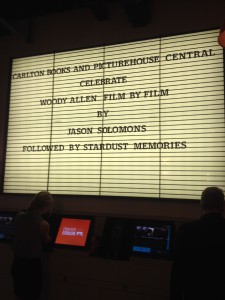 Here are some pics from the launch of my book, beautifully staged at the fab new Picturehouse Central, who served up lethal Manhattans and lovely bagels. It was a superb venue and I had a whirl of a time trying to make a different Woody gag for every different book I signed for friends. It was a bit exhausting – especially after a couple of Manhattans…

Thanks to my wonderful brother Daniel, for the pictures and for the beautiful pen he gave me right at the start, for signing all the books.

Here’s the speech I made, more or less, with a few Woody impressions thrown in that you’ll have to imagine for yourselves.

Thank you all so very much for coming to this magnificently re-purposed venue in the heart of London. Thanks to Picturehouse for welcoming us all so warmly and grandly to their new Picturehouse Central  – it’s a real thrill to be able to launch a book about cinema in a venue that cares so much about this sort of cinema. 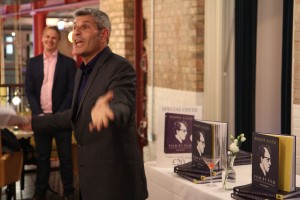 I hope you’ve been enjoying the Manhattans. We were going to come up with a whole Woody cocktail list – A Purple Rose of Cairo, a Sleeper, a Bananas Daiquiri, a Mighty Aphrodite would have been potent, a Blue Jasmine, which would have used up that bottle of blue curaçao at the back of the cupboard at least, A Broadway Danny 4 Roses, or a cheeky Midnight in Paris….

I’m glad we stuck with the Manhattans which I see are going down very well and swiftly – but it goes to show what a heady cocktail of films and flavours Woody Allen has served us up over the years, and I hope that’s what I’ve captured in the book we’re all here to celebrate. 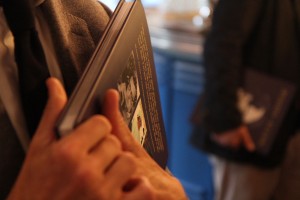 I told Woody I was writing this book about him, well, not about him, but about his movies. He seemed relieved at that and told me: ‘Just make sure the cover looks good and the book’s heavy.”

I do think I’ve achieved maximum heaviosity at least and I thank my editors and publishers at Carlton for that, and for sharing the attention to detail I had. I thank my wife Tessa of course, because just imagine if I didn’t…but i do thank her for everything and also for insisting on more picture research and helping with the flow of images so astutely.

When she saw the finished product, I asked her what she thought and she said she loved the white space – so that’s great, the stuff without either me, or Woody Allen…. But I know what she meant – and I like the white space too – I’m proud that we’ve come up with a beautiful, heavy book that reflects and amplifies these wonderful movies that my favourite director has created. 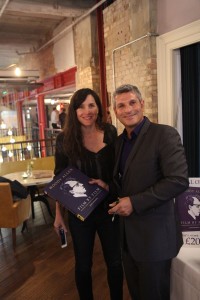 Rachel Shelley gets her copy.

Woody also signed a book of Irrational Man for me, the philosophy primer by William Barrett that introduced existentialism to many Americans in the 1950s. It was the inspiration for the title of his latest film, Irrational Man. He thought about what he was going to write in it and showed me proudly what he’d scrawled in the front: “Much better book than the movie… best wishes Woody Allen”

He can get away with such self-deprecation. As for me, I wouldn’t dare – my own book would be nothing without his movies and they’re all better, all 50 plus of them, than my book – well, maybe not What’s Up Tiger Lilly? or Curse of the Jade Scorpion. Or Hollywood Ending…

Anyway, we’ve all got our favourites and our least favourites and I hope the book is a great starting point for such debates and a path to discovery for some non-completists out there. 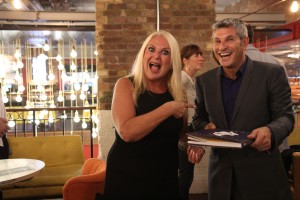 We film critics often say that we see the films so you don’t have to, and here’s a book that has seen all of Woody Allen’s movies so you can pretend you have too. But I hope it’ll send you out to see more, starting tonight with what I must stress is an entirely optional but thoroughly recommended screening of Stardust Memories, a crucial film in the Woody cannon – although of course the largest cannon in Woody’s work is in Love and Death.

Thanks for coming – I’m amazed no one has come dressed as a Moose – although pleasing that there at least plenty of Solomons here (Moose sketch reference there, I can see some baffled expressions – check YouTube) –  buy the book, tell your friends to buy it too, and your enemies. And as Woody Allen might say, fabulous events like this are why we live in London, baby, and not in Deluth – besides, I’ve no idea where Deluth is…”