“I love to play with this idea,” Ozon tells me. “Some people get frustrated with this because you don’t have a clear answer in my stories, you know, sometimes it’s a mystery at the end but for me this duality is much more real, to not know for sure what has happened.”

L’ Amant Double is loosely based on a 1987 Joyce Carol Oates story called Lives of The Twins (published under the nom de plume of Rosamond Smith) and tells of a beautiful Parisian woman, Chloe, who falls in love with her psychoanalyst and, later, his twin brother. Chloe, played by actress and model Marine Vacth, is thus caught between two sides of the same man (both are played by Jeremie Renier) and Ozon ratchets up the mirrors, the spiral staircases and the delusions, bringing Chloe face to face with an older woman (Jacqueline Bisset), who may be a reflection of the past and also a projection of her own future.

Such confusion is deliberate and dizzying, the spectator carried away in a flow of sexy, camp imagery that harks back to the lurid American thrillers of the 80s such as Basic Instinct and 9/12 Weeks as well as to Brian De Palma, Luis Bunuel and Alfred Hitchcock. I kept thinking of David Cronenberg’s Dead Ringers, too. 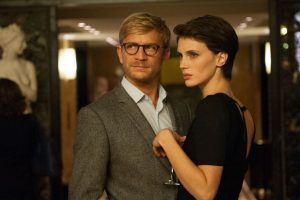 “Yes, all of that is there,” trills Ozon with delight. “It’s a very playful film and I had a lot of fun making it and editing it. It’s a tease, of course.” I tell him that this is just the sort of thing English audiences want from their French movies. “You mean everyone is naked?” he jokes.

Yet there’s something glaringly right about that, too. The English don’t do decorous nudity, at least not in movies. I quote the title of the old West End farce No Sex Please, We’re British, a title which makes him laugh. “Ah yes, but it’s not true in my experience,” he says eventually. “Maybe you English don’t make this kind of movie, that’s true, but you love this idea, that the French are more exotic and kinky and perverse than you, but it’s not correct. I think the English hide more than the French. Maybe sex scenes is not your cup of tea but you do it in real life, so you don’t need it in your movies. The French speak too much about their sexuality, which is because they’re not actually having sex. That is their problem.”

He says, however, that the impetus to make L’Amant Double was not out of a desire to put more sex on screen or to revive more English actresses but to ensure his reputation as film maker took yet another turn. His last film, Frantz, was a beautiful black and white piece about a dead soldier set in Germany and Paris just after WWI. It’s unrequited passions had critics signalling the maturing of Ozon’s talents. “I wanted to show that I hadn’t grown up, that I was still an enfant terrible,” he says. “I loved making Frantz, but when I was editing it, I realised that I didn’t have any sex scenes, so I returned with a film that has many of them, just to be capricious.”

I sense he’s kidding a bit again, the playfully elusive nature of his movies being partly present in him, too. Ozon is well-known as a gay film maker, but very few of his films focus solely on homosexual experience. Most of them present two sides of a character, where fantasy mixes with reality, where sexes mingle and blend, where personalties meld and bend. Under the Sand, Swimming Pool, In the House, The New Girlfriend, 8 Women – all of these deal with youth and age, generational pulls, sexual tensions.

“I find the characters in my film are liquid,” he says. “When I write the script, I can enter all their heads, male or female. I do actually find it easier to project myself through a female character but I don’t find there’s much difference between male and female sexually, to be honest. As a child, and I remember my parents being confused by this, I could play boy or girl. I loved Romy Schneider and I felt very close to her, but I don’t know if I wanted to be her, or to have her, you know – it was identification and a kind of love but it was not sexual. At least, I don’t think it was. Maybe it was. A bit. You see? I still don’t know.” 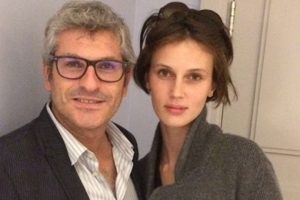 Ozon’s latest muse is the actress and model Marine Vacth. She made her debut for him in the provocative Jeune et Jolie, where her coltish figure was on full display as a symbol of male desire and a daring return of the male gaze. Vacth has since married and had a child and taken more concrete steps into the world of acting, a path she wasn’t at all sure she would follow after her first experience with Ozon.

“I’m more fixed on it now,” she says, though hardly willing to commit. “I didn’t seek Francois, he called me and because I like him and trust him, I said Yes.” I ask her if the script, with its nudity and sexual scenes, gave her any qualms? She looks at me like I’m barmy. “No? Why should it? I thought it was funny,” she says. “I don’t see nudity as a hindrance. It’s a costume, after all. I could see these scenes weren’t gratuitous but interrogatory, part of the story and I knew Francois wouldn’t harm me or exploit me.He asked me if I was happy to go that far, if I was ready for that. I said I trusted him and that was it.

“I don’t know what makes me or any other actress comfortable with appearing nude. I don’t think it’s a French thing in particular but you’re either up for something or your’e not, it’s down to the relationship you have with your own body. I guess, later, it’s a bit weird seeing yourself up on the big screen in front of everybody, like when I saw L’Amant Double at Cannes, but then I feel it isn’t me up there, it’s a character.” 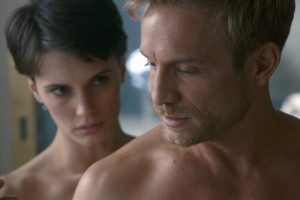 I wonder how Jacqueline Bisset inspired her, if they compared notes? “Oh, she was very gentle with me and generous with her time and she is in very good shape, still very beautiful. You know, she has aged well because she has accepted it, used it. I thought she was very cool but as for me, will I be like her? I have no idea if I’ll be working in movies at that age. I live with the projects I’m doing, then I see what happens. I don’t look very far ahead.”

Bisset, now 73, was a ravishing English beauty when she began her career, and established herself in Hollywood in films such as 1969’s Bullitt and Airport 70, and in France in Francois Truffaut’s 1973 Oscar-winning Day for Night and the big French hit Le Magnifique opposite Jean Paul Belmondo. Murder on the Orient Express and The Deep cemented her star billing as did starring in George Cukor’s final film Rich and Famous, a 1981 movie which Ozon says he loves.

“‘I’m interested in women starting out and in women of great experience,” he says. “Jacqueline is a legend, like Charlotte Rampling and Catherine Deneuve who I worked with, and Marine is very young still. I like this chemistry between old and young, each staring at each other, seeing their older or younger self. I think Jacqueline was nervous of Marine, because she is so beautiful, you know, and I know Jacqueline hadn’t acted in French for a while but she was charming and she still have a very sexy accent in French. I think she is more sexy now than ever.”

Ozon’s fascination for female icons of the 1960s and 70s found more expression recently when he was asked to make his first music video. It was for singer Francoise Hardy, whose new single Le Large is taken from her 24th album, Personne d’autry.

“They told me it might be my first ever music clip, but it could be the last one Francoise ever makes, so I couldn’t refuse,” he says. The resulting video is gorgeous, shot in black and white, about a young boy idolising the present-day Hardy and intercut with images of the singer in her younger days, fashion shots and TV appearances.

“I wanted to do something Bergman-esque,” he says, citing Persona as an influence. “I wasn’t concerned about showing her as younger because I think she is still very beautiful these days, even more so than when she was young, I think. But I’m  a huge fan, so yes, in a sense the kid in the clip is me and the result is my dream of Francoise, my response to so many years of loving her and her songs.”

Even in a four minute pop video, Ozon’s obsession with duality and co-existence shine through. His is a world of mirrors, where reality melts into imagination and fantasy, where the gaze of one generation is returned by another, to challenge perceptions with sex, laughter or murder. Who would he have loved to work with, if he could disappear down the camera lens of history, if he could melt into the big screen like a time traveller?

“Oh, can you imagine working with Elizabeth Taylor,  or Greta Garbo, Vivien Leigh, I love Vivien Leigh? I would have been great in old Hollywood,” he says with a sigh. He may hark back to another time, another era, but Francois Ozon is doing pretty well in the present.