As you know, I’m hosting a daily radio show at Cannes this year, for Radio Festival, the festival’s official web radio station.

I get my own jingle and everything. It’s very cool, and breathed in a sexy French accent by (I’m imagining) a beautiful woman smoking a cigarette –  even if what she’s saying doesn’t really make any sense: “all the news that fits in English…”? I think the bosses here were going to change it when I suggested it didn’t actually mean anything, in English, but I rather like it – in the end, ca fait Francais, quoi?

So I kicked off with my first show today. The Cannes Review gathers critics from around the world to talk through the two Competition films of the day, plus a little “Scene Stealer”, a gem that’s caught their eye in other sections. 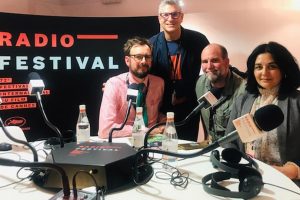 My first guests were Robbie Collin of The Telegraph – and sometime radio host of the film show on BBC Five Live; Jessica Kiang, a really sharp critic for Variety and the Playlist; and my old Guardian Film Weekly Podcast mucker Xan Brooks, who’s covering for The Observer again this year and it’s great to see him and be working another Cannes with him, now that he’s a lauded novelist and all. (Seriously, get his debut book – The Clocks in this House All Tell Different Times. It’s very smart, dark, a bit weird, cinematic, twisted and very impressive

It’s about a small town overtaken by re-animated zombies who dig themselves out of their graves when the earth shifts on its axis due to ‘polar fracking’.

Robbie enjoyed it; Xan found it rather slight and old hat and not very funny; I liked it as a Cannes opener, with its film references providing minor chuckles and the odd groan; but I think Jessica talked us all round to admiring its sense of bleakness and mournful pessimism as we tried to parse its political allegories – zombie movies are always allegories – and as we head zombie like to a parade of movies over the next sleep-deprived, wifi-dependent couple of weeks at Cannes, and as we all head zombie-like into a moral and political abyss under Trump and fake news and environmental disaster.

I also asked my guests about their favourite-ever Palme d’Or winner. Robbie went for last year’s winner Shoplifters as the one during his time covering the festival – he’s in his seventh year, the pup – and Shohei Imamura’s 1983 winner The Ballad of Narayama. I think he likes Japanese cinema a bit.

Jessica found it hard to pick from so many formative classics, but she did go for Uncle Boonmee Who Can Recall His Past Lives, the Thai winner from 2010.

I’d rather surprised Xan with this element, but he swerved manfully to cite The White Ribbon as up there but king of all for him was Taxi Driver, which won in 1976. “Imagine being here for that screening,” he dreamed…

It’s a great show. Have a listen.

Oh you want my Palme d’Or all-time favourite, do you? You’ll have to wait til the final show. Only 10 to go…