I spent Saturday at BFI Southbank as host of Jean-Luc Godard day. Well, actually it was Anna Karina day in the exhaustive JLG season being held down there by the Thames, a day dedicated to Godard’s muse and ex-wife, who collaborated with him on eight pictures which have come to define New Wave chic and cinematic cool.

Anna joined me on stage after a packed screening of the superb Bande A Part, the 1964 classic in which she, Sami Frey and Claude Brasseur attempt a robbery, though mostly end up hanging out, running through the Louvre and doing the Madison dance in a now iconic scene in a Paris cafe. 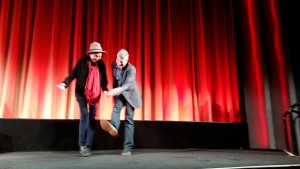 Would you believe it, I actually got Anna Karina to do a bit of the dance with me. She was reluctant at first and made me do it on my own at first – the BFI audience were very appreciative and tolerant, I must say. She told me she hadn’t done the dance for ages, but that originally she and her co-stars had rehearsed it every night for three weeks in a St Germain night club – not that she couldn’t get it, but the boys, apparently mon Dieu…

They did nail the dance in one take, but actually the final version – it’s hard to spot – is editing together from the three takes Godard finally made them do.

Oddly, she remarked, you never got to rehearse in Jean-Luc’s movies, and in all the films she did with him, this was the only time he made his actors practise and rehearse something – a scene which now part of cinema lore and which Quentin Tarantino – whose production company is named Band Apart after the movie – made John Travolta and Uma Thurman watch many times before their dance in Pulp Fiction.

Anna revealed much else – how that run through the Louvre was completely illegal and improvised and that the security guard trying to stop them is totally for real. 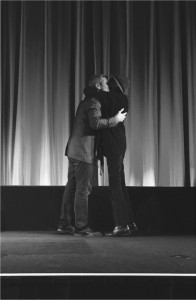 In our extended intro to Le Mepris, she revealed how JLG once hit her out of jealousy and how he pushed a producer down the stairs, breaking his leg. And how the swear words she herself used when fighting with JLG made it into the script during Bardot’s arguments in the flat with Michel Piccoli. “Oh, I was always saying to Jean-Luc, ‘merde’, ‘va-te faire foutre’, ‘connard’…”,

And later, in the QnA for Vivre Sa Vie, we talked of how Coco Chanel gave her the stage name Anna Karina and walked off (they never saw each other again..); how Nana, her prostitute character’s name in the movie is the nickname Godard called her; how late night drinking sessions with Jean Paul Belmondo on the set of Pierrot Le Fou turned expensive; and of fights in Majorca with Richard Burton and Liz Taylor (“she was very vulgar when drunk,”).

Anna even told me how Godard made her improve her French accent (she is Danish and only came to Paris at the age of 17, not speaking a word of French – she learned most of it by going to the cinema all day) – by holding a pencil in her mouth while she talked, sometimes all night.

We smoked and drank wine and hung out all day and as we took some cold London air by the Thames, she told me how she’d once been on a boat along it with Burton and Taylor and Tony Richardson, who nearly threw Burton into the river for being a total arse. Or maybe it was the other way around, she said, with a priceless shrug.

I loved this little video the BFI put up over the weekend.

Anna doesn’t quite look this young anymore, but she’s still got the charisma and the twinkle in her eyes and is still mesmerising, I promise you.