Here they are at last, then, my Top Ten of 2016, as first unveiled live on my weekly slot on the Robert Elms show on BBC Radio London today.

10 Nocturnal Animals –  Tom Ford returned with this surprisingly tough and clammy picture, not likeable but admirably taut. Amy Adams is great as the art dealer who receives a manuscript of a novel dedicated to her, written by the ex-husband she hasn’t seen for 20 years. She doesn’t like what she reads, but can’t let go of the novel’s tensions and revenge.

9 Under the Shadow – A total surprise, this film came from Iranian British film maker Babak Anvari and boy was it smart, a horror with real intelligence and scares. Set during air raids in 1988 Tehran, it’s about a mother and daughter trapped in their apartment block by many malevolent forces – they might be the real threat of missiles, the curse of the djinn spirits which move daughter’s dolly, or the general shacklings of sharia law which enclose this woman and “possess” her. It was Britain’s entry for Oscar foreign language film, but sadly hasn’t made the shortlist.

8 Hell or High Water – a really fine thriller came from David Mackenzie, following two bank robbin’ brothers Chris Pine and ever-livewire Ben Foster across Texas, with laid back sheriff Jeff Bridges in pursuit. It’s a modern-day Western, with sharp social eyes on the dustbowl of today. Plus it’s exciting and full of twists, and Bridges is better than he’s been for ages.

7 Napoleon – achievement of the year is surely to have got Carl Davis score synced with Kevin Brownlow’s majestic restoration of Abel Gance’s Napoleon (two masterpieces in one), an epic biopic which never even gets past the first Italian campaign yet contains almost non-stop thrills and delights in its four and half hour running time. Now available on DVD blu Ray, it’s the best box set you’ll ever dive into.

6 American Honey – Andrea Arnold returned with her first American film, a road movie following a girl called Star (Sarah Lane) who, attracted to the sweaty Jake – Shia Labeouf – joins up with a young band of magazine sellers who travel to small towns across the south. It’s a like a hip hop Oliver Twist, with Fagin replaced by the rather more comely yet ruthless Krystal, played by Riley Keough. It’s dazzling and puzzling yet the cumulative effect is sexy, euphoric and exhilarating. Someone said to me, Oh that film made me feel old – I was  saddened because it made me feel young, like i wanted to run away and join the circus.

5  Innocence of Memories – doc maker Grant Gee conjured up a brilliant film essay wandering the streets of Istanbul and re-enacting a novel by writer Orhan Pamuk for which the author has also opened a museum stuffed with relics and objets from the book. I love the layers of fact, fiction and observation here, the way the voice-overs re-enacted the novel but also the playful experimentation with the city’s ebb and flow, the lull of time and memory and the interviews with real characters, a photographer, an actress. I thought it was all quite brilliant and I loved the museum and the lipstick traces on the cigarette art, those little reminders of lives lived and loved. 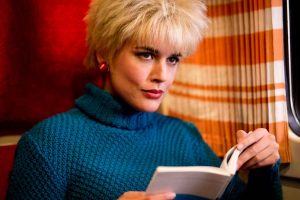 4 Julieta – Almodovar’s return to top form has been neglected, I feel. This is one of his very best films, typically bursting with reds and colours, but also with emotions and tragedies. A mother seeks her estranged daughter is the essence of the plot, but there are so many diversions and cinematic tangents. Ultimately, I felt it was about time lost and I wept for the wasted years, but there’s always something so hopeful and uplifting in Almodovar’s melodramas, you come out stronger for your sobs.

3 Weiner – 2016 was such a politically charged year that I have to put this doc high up the list. It’s a political doc par excellence, the crew granted quite ludicrous access to the campaign and private life of Anthony Weiner, who clearly has no idea what a tool he is, literally. A repeat sex pest, he’s trying to make a comeback as Mayor of New York and we watch him and his patient wife and Hillary Clinton aide Huma Abedin as they haggle for support and money. It’s a darkly satirical look at the poisoned political process as well as at the hubris of this one guy, who ended up with a pivotal role in the Clinton email scandal, while his wife left him. It’s a doc that’s hilarious, as well as shocking and still has miles to run….

2 Son of Saul – Although this won the Oscar earlier in the year and premiered at Cannes in 2015, it bowed in the UK in April 2016 and I couldn’t dismiss it as last year’s product because it’s far too important for that. I think its one of the most significant films of the century so far, a film which stirs the holocaust of all political trimmings and gets right to the heart of the horror, to what it must be like to be swept up in an infernal death machine, to attempt to live in the jaws of hell. It’s a stunning piece of film making from Lazlo Nemes, a relentless coup de cinema, as gruelling as it should be – but oddly, it’s not as awful to watch as you might think – because it eschews all sentimentality and music and the usual cinematic tricks, it leaves you just watching and observing, drawing your own conclusions to the madness. 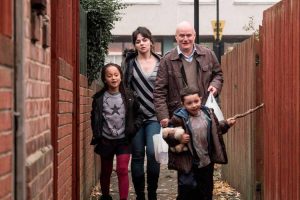 1 I, Daniel Blake  – again, I can’t claim this is the most sophisticated or ground-breaking bit of cinema this year, but I can tell you how it whacked me and hopefully society in the guts. You don’t need to adorn your message with cinematic flourishes when you tell it like it is, as Ken Loach does here, showing poverty-struck Britain, trapped in food banks and benefit systems, portraying a society where decent people are betrayed by the very systems there to save them. It’s painful to watch, yet Loach’s enduring humanism shines through, in the form of Daniel Blake (Dave Johns) and, in particular, Hayley Squires’ brilliant performance as Katie.

Without doubt, I’ve been talking about this film all year, and was so thrilled it won Cannes over everything else, which it booted out of the way with its plain-speaking, angry, precise simplicity. I couldn’t believe we live in a place like this, but I do now, and I can feel it snapping at me, the cold hunger of poverty and inequality. Loachian dystopia are not set in the future, they are here and now.

So it has to be the film of the year, because it captures this year of political betrayal and voter anger, a year of widening poverty and increased austerity, far better than any other film, in spirit, in intuiting the times, in appealing to our hearts and reminding us we all sink or stand together.

It was a big year for Loach, who also featured in a doc Versus, about his career, and who also re-released Poor Cow on BluRay as well as made all his films available for free online.