Venice usually kicks off, for me, with a couple of jolly parties. I started up on the roof terrace of the Danieli, where Variety held their annual reception for the Jury President, which this year is Annette Bening.

Traditionally, the food and drinks at this do are themed around the guest of honour, so there were oddities purporting to be from Being Julia and some truly awful cocktails – served in tea mugs – claiming to be for The Grifters and The Kids Are All Right. There was an American Beauty dessert, which I swear was the same as the one they used when Sam Mendes headed the Jury a couple of years ago.

I asked Annette how it felt to have all this food named after her. She smiled (make that winced) and looked around at the tables, not having quite yet understood she was the “theme”. When she twigged, bright as a button she replied: “Well, it’s better than a sandwich.”

The evening took off when I discovered the Grey Goose Fizz Bar. 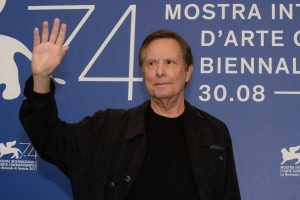 The next morning was packed with movies. Downsizing I’ve written about elsewhere, and the First Reformed. There was also a very strange doc by William Friedkin, called The Devil and Father Amorth, which films a real exorcism in Rome. Father Amorth is a 90-year-old priest and known as the top exorcist in Italy and Friedkin’s famous film is apparently his favourite movie.

He allows Friedkin in to witness the petrifying scene of him laying hands on the head of 30-something Italian woman called Cristina who believes she is possessed. True enough she starts writhing and yelling in a bass guttural voice, so different to her usual soft tones. She flails and screams and two men have to restrain her as she shouts “Never Never,” or “We are legion, We are armies” and “She is mine”, The priest merely continues his incantations and benedictions and instructions to the devil to leave this woman.

While there’s no turning of heads or projectile vomiting as per his own film, Friedkin just keeps filming on his one camera, sometimes showing the considerable crowd of family and friends who’ve also gathered in the room to help and witness and join in prayer.

It’s stirring stuff and Friedkin, a forceful narrator and storyteller, follows it up by interviewing leading brain surgeons and neurologists to ask what it could be.

It was a strange day at Venice, with themes of religious faith and good and evil, what with Friedkin and Schrader. 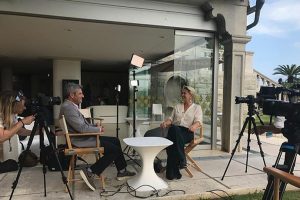 Me with Trine Dyrholm talking about Nico 1988

In between there was Nico 1988 (featured image), which was opening the Orizzonti section of the festival, a film by Italian director Susana Nicchiarelli and starring that wonderful  Danish actress Trine Dyrholm who’s so good in The Commune and Love Is All Around as well as Scandi TV show The Legacy.

It follows Nico – yes, the beauty from The Velvet Underground – over the last two years of her life when she was living in Manchester in a modest house with bad plumbing (it reminded her of Berlin after the war, she said) and going on the road with an experimental band.

Apart from a terrible, dour performance from John Gordon Sinclair as her manager, this Nico is a fiery, fabulous biopic, in which Dyrholm in her black wig and shining eyes, sings Nico’s songs in that deep teutonic avant-garde growl. It’s a barnstorming performance that just explodes off the screen with such charisma and energy that it can even survive Gordon Sinclair’s perma-scowl.

Later that night, I attended the opening gala down on the Excelsior Beach, which is always beautiful and lit by candelabras with oodles of food – a bit rich coming after the ‘less is more’ eco-message of Downsizing, but there you go, that’s film festivals for you.

I chatted with Edgar Wright who is on the Jury and looking forward to days of just watching movies. He’s just come off a 14 country tour with Baby Driver and it’s been a ride – I’m delighted he’s been able to help push the film to such good box office, a hit which should mean he’s a major player for a while.

John Landis and his costume designer/curator wife Deborah were there, celebrating the making of the Thriller video with a new doc on the subject. And there was Annette Bening again – this time we chatted about her forthcoming film Film Stars Don’t Die in Liverpool, the world premiere of which she flies to directly after the prizegiving ceremony here next Saturday night. The film, produced by Colin Vaines and Barbara Broccoli, also stars Jamie Bell as the young man who falls for Hollywood legend Gloria Grahame (Bening of course) in a film based on a true story. It’ll be at Toronto, then as a gala at the BFI London Film Festival in early October. 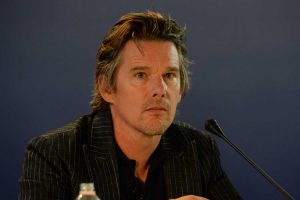 Ethan Hawke was at the buffet with his teenage son. I recommended the rabbit stew to both of them but they looked a bit horrified, so I pointed to the seafood pasta and they piled in. I congratulated Ethan on his performance in the Schrader movie, which he said was some of the hardest work he’d ever done, “in a good way”. I think he might get some awards for it, starting right here in Venice.