You wait all night for a shock then two come at once. I really didn’t think Olivia Colman was going to win – not because hers isn’t a fabulous performance in The Favourite, but because Glenn Close WAS the favourite after her wins at the Globes and SAG and the Indie Spirits, and Olivia had hardly bothered to campaign.  When I saw her at Venice after The Favourite’s world premiere, I asked her if she was ready for an Oscar campaign – and she tittered and tottered and waved me away with a “don’t be silly” snort.

But secretly, Olivia wanted this badly. All actors do. Why wouldn’t you? Once you’re in the race, you may as well run it your own way. In the end, maybe it’s that Colman smile that did it, the flash of very British teeth.

And for all her diva-ish tendencies, Close just isn’t that liked by Hollywood, clearly. Seven losses tells you something – I think they’re scared of her, and men voters of a certain age can’t bring themselves to vote for a ‘bunny boiler’. And try as she might to distance herself from that Fatal Attraction part and it’s depiction of female vengeance, I’m sure Glenn herself could boil a few of Queen Anne’s bloody bunnies right now.

Colman’s win was a pleasant surprise, and a lovely stumbling sort of speech that only Brit winners can deliver. What came next was not so cheered in the Academy’s London Oscars party room at Ham Yard, where I was watching, with a couple of espresso martinis and a pastrami bagel.

Green Book’s win was, in fact, booed. But, look, plenty of people love that film for what it is, and it’s not for me to start pointing fingers at them and telling they’re racist idiots. Mahershala Ali is a cool dude and knows what he’s doing and his dignity alone in putting up with that part and making it so good is the whole reason that film won. If it’s good enough for him, then it’s good enough for all those old white voters to pick and make themselves feel ok that they’re supporting a film about overcoming racism through decent piano playing. 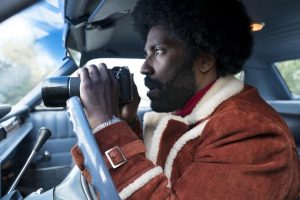 It’s a ridiculous movie from that aspect, at least 30 years out of date in its racial politics. Just as Spike Lee’s Blackkklansman is fresh and edgy and all over the shop, so it was in 1990 when Do The Right Thing wasn’t even nominated and Driving Miss Daisy won, with the dignified black man again overcoming the cantankerous white racist, from the front seat.

You know, if Mahershala had been made the lead and nominated for Best Actor rather than Supporting, all would have been ok with Green Book. But the poster, with Ali firmly in the background and relegated to Supporting only served to illustrate the film’s retrograde attitude. I liked both performances and can see it’s a well-honed script, if not a perfect screenplay – for me, it doesn’t really pay off at the end.

So after a night of historic, black representation and success at the Oscars – those two Black Panther wins for costume for Ruth Carter and prod design for Hannah Beachler were wonderful – you can see why everyone cool is disappointed by Green Book.

ROMA (featured image) would have been one of the best winners – probably THE best, even above Moonlight and 12 Years a Slave – of the 21st century; Green Book merely takes its place alongside perfectly watchable, mainstream, middle-of-the-road Oscar gloss such as Crash, Argo, A Beautiful Mind, Spotlight, Chicago and The King’s Speech.

Still, it was good seeing Alfonso Cuaron holding three Oscar at the end of the night, and good to hear a deal of Spanish spoken at the ceremony, Hollywood finally allowing blacks and Latinos to be seen and heard and not just serve the desert or cut the lawn.

Same with Bohemian Rhapsody. People love it, because they like Queen songs. If you want to see the murky Mercury story, then make that film yourself. If you want a mega-hit, the highest grossing biopic of all time, and you’re Brian May, you make this shiny testament to your own music and your mercurial, much-missed lead singer and sort-of friend. But is Bohemian Rhapsody a good movie?

No, it’s an enjoyable family musical, with songs you know off by heart. But is it anything like being  in a band? No. Nor does it get anywhere near examining the gay life of its lead singer. But you can’t say it’s wrong for not being the film you wanted it to be.

I think it’s good films such as Bo Rhap and Green Book get a look-in at the Oscars. Culture is a mix these days, a mash of high and low and audiences are perfectly capable of assessing both, and enjoying both.

In the end, ROMA was just too much of a stretch for too many people – I can’t tell you the number of people who tell me they found it a slog. Of course, I then ask if they watched in on Netflix or at the cinema? Inevitably, those that flick on it via Netflix soon flick off again, because that’s the viewing model of a streaming service. On the big screen, ROMA is a magnetic, gorgeous, magnificent film into which you disappear. On Netflix, it looks like nothing’s happening; on the big screen, all life is here, in the background. Which is surely the point? ROMA’s about a maid and some children, so revolution, politics, divorce, violence, all of that happens but it’s not their business. It is background, until the final scenes at the beach, when life and death finally become a tangible reality for Cleo and the kids.

Of course ROMA should have won Best Picture, because it was the Best Picture nominated, by several miles. But this is the Oscars and, in the end, right at the end, this was a ceremony to remember.

Personally, I had a great time. The London party was fun at Ham Yard, a good crowd and atmosphere.

I made it to the end, nipped home for a two-hour kip for the BBC car arrived and I went to a production meeting in the BBC News room. I popped to Vanessa Feltz at BBC Radio London for a brief stint before presenting the Oscar Results show with Martine Croxall on BBC News.

I then one to see a movie, and do an interview, before returning to the beeb for more analysis – first with Matthew Amroliwala on BBC World’s Global show, then with Huw Edwards on the News channel.

There was loads to talk about each time, a really meaty Oscars for discussion – and I even got to blow a raspberry, Olivia Colman-stylee, at Matthew when my Global slot was running out of time…