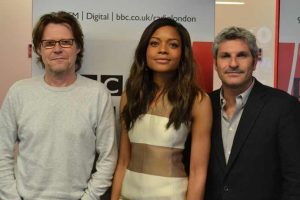 I was lucky enough to be joined by a very well-dressed Naomie Harris today on Robert Elms’ show on BBC Radio London.

I’ve always loved her very much, such an enthusiastic presence and, well, very very pretty company, always laughing. She’s my celeb crush, as you know, although that actually diminishes with each meeting as I come to just like her more.

She’s the best thing in Our Kind of Traitor, the new John Le Carre adaptation. After The Night Manager, it’s a step too far for me, but looks zippy enough as Naomie as Gail and Ewan McGregor play a couple (she’s a barrister and he’s a poetry professor) whose relationship issues heal while they become involved in shady dealings between the Russian mafia, money-laundering toff MPs in the City, budget-hampered MI6 spooks and Stellan Skarsgard who wants to turn everyone in and save his family.

The film jumps from Marrakech, to London (Emirates Stadium, hello!), Paris, Berne and the Alps – all very shiny and glamorous and treacherous.

I didn’t really believe anyone in it, except Naomie, who really looked like she simply didn’t want to be there, in a good way. As she didn’t….

Anyway – here she is, the fabulous Naomie Harris, fresh back from the Met Ball, and talking Le Carre, 28 Days Later and of course, why she prefers Moneypenny when she’s stuck behind a desk….