Mapplethorpe: Look At The Pictures is a beautiful, shocking, melancholy documentary about the life and photos of Robert Mapplethorpe.

It’s a story told by the many people who knew him or got as close to him as possible, but it’s also a tale of controversy and changing perceptions of beauty and sexuality. And photos of large penises. You might call it a cock doc. Or a cockumentary. (ok, that’s enough knob gags. Mapplethorpe took his dicks very seriously.)

There’s a lot of stuff about early 70s New York, the Chelsea Hotel where Mapplethorpe lived with Patti Smith. Who can forget the cover photo of Patti’s 1975 Horses album, which Mapplethorpe shot?

We get plenty about that era of hedonism, experimentalism and punk, until the AIDS virus swept through the artistic and homosexual community in the 80s. 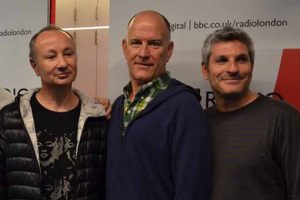 Me with Fenton Bailey and Randy Barbato

Directors of the piece, Fenton Bailey and Randy Barbato, discuss with me the journey of their film and the re-appraisal of Mapplethorpe’s work that forms part of their documentary narrative, following as it does the staging of a huge retrospective of the artist’s work.

Despite the ultimate seriousness of their movie, the pair prove fun, eloquent, erudite company for this edition of the podcast as we discuss the power and challenging beauty of the images, the shifts in morality and the character of the man himself.

Look at the Pictures, listen to the show…

To find out where you can see the film click here  or visit here.