The LFF Friday started with a Brexit panel, an industry pow-wow over what’s going to happen to all of us post-referendum. Chaired by the BFI’s ever-cosmopolitan Isabel Davis, the panellists, including producer Gail Egan, raised the various issues facing British film makers and producers.

Much seemed to hang on our continued membership of Creative Europe but Ben Roberts, Head of the BFI Film Fund, was in the foyer of Picturehouse Central afterwards saying: “Don’t Panic.” Apparently, even if Brexit means being slung out of Creative Europe, we can pay membership fees to get back in. Plus the Germans and the French seem to be up for negotiating “bi-lateral” agreements on a film by film basis, so Roberts is probably right. Only thing is, do we want to me a member of club that would have a country like ours as a member? Or something.

I popped in to see My Life As A Courgette, a very cute Franco-Swiss animation about disadvantaged children in a home. The unpalatable situations of their lives are rendered whimsical by wide-eyed stop motion figures and some excellent kiddie voice performances. It’s ok but requires a high charm threshold.

Manchester by the Sea

A shift in tone ushered in Manchester by the Sea, trailing awards buzz for Casey Affleck’s lead performance and Kenneth Lonergan’s uncanny ability to capture the rhythms of real life in highly-written scenes. It’s about a janitor frozen in grief for an event that haunts us in flashbacks when he returns home to the titular lobster-fishing port north of Boston following the death of his brother. 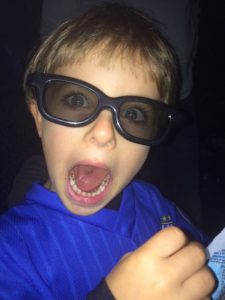 As if to banish such moody blues, we went to the Family Gala on Saturday, to see the fuzzy-felt, feel good fun of Dreamworks’s latest, Trolls. Oh, it was a happy movie (about finding your inner happy), full of colour and brilliant animation, some lovely songs (Anna Kendrick and Justin Timberlake are the lead voices) and wonderfully expressive ogres called Bergens.

It doesn’t have the honed story sharpness of a Pixar, nor quite the heart, but it does have a pop sensibility and sugar-rush high that left us all humming Can’t Stop the Feeling.

Sunday brought more comedy in the form of Mindhorn, a batty laugh-fest from Julian Barratt and Simon Farnaby that certainly had the Odeon Leicester Square in fits. Barratt plays 80s TV detective Mindhorn actor Richard Thorncroft, who is called out of penurious retirement in Walthamstow by the Isle of Man police. A deranged killer is on the loose and will only talk to detective Mindhorn, a character similar to Bergerac crossed with MacGyver, played with a dash of Simon Ogilvy.

It’s a very British affair, and the cameo from Steve Coogan hints at the tradition within which it lies on the Alpha Papa/David Brent highway, but it is very funny, sometimes giddily so, with little else to sustain it. We don’t really feel much pity for Thorncroft, even as the crazed Kestrel villain (a silly Russell Tovey) superglues him into his own Mindhorn costume. There is, however, an inspired comic sequence at the Manx-day parade, a great, game performance from Barratt at the heart of it. 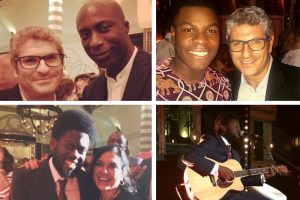 So to the Queen of Katwe gala for my Virgin Atlantic chums. The film went down a treat, flooding the Odeon with warmth and the gala party was the best of the week, with an intimate performance from Michael Kiwanuka and guests including Ozwald Boateng (top right), David Oyelowo, Lupita Nyongo, John Boyega (I danced a conga with him), Gurinder Chada and Academy boss herself Cheryl Boone Isaacs, hopefully seeing London isn’t so white after all.

It was a warm and funky night to herald Mira Nair’s smartly subversive feelgood Disney movie about a teenage chess prodigy from the slum of Katwe in Kampala, Uganda. Watch out for it – it could do a Slumdog and go all the way.