The LFF festivities got underway with the curtain-raising glamour of the IWC Film maker Bursary awards bash at the Rosewood Hotel on Tuesday night, October 4th.

You’ll remember after I hosted the launch at BFI Southbank last month, there really was plenty at stake, in the shape of a £50,000 prize on offer to the winner, cleverly framed by the Swiss watch company sponsors as “the gift of time” – giving a film maker time to think, to write, to live while making their next project.

So let’s get on with it: the winner was…. Hope Dickson Leach, whose film The Levelling (pictured) told of a veterinary student called Clover returning to a flooded Somerset to deal with the apparent suicide of her brother Harry and the subsequent breakdown of her father on the family farm.

I must admit I was a bit surprised – I rather fancied Alice Lowe’s film Prevenge would take the prize, although given how well that’s already going down in the industry, I’m sure she’ll be all right anyway and get on and make another top film. Still, when I saw her a few drinks to the good after the ceremony, Alice was sure missing that 50 grand.

I also had great hopes for Paul Anton Smith’s Have You Seen My Movie? which I thought was absolutely brilliant, and I’m having no qualms about making it my must-see movie experience of this 60th LFF. Paul’s film is composed of about 1000 clips of other films, and takes the viewer through the entire process of going to the pictures to watch a movie.

So we get clips of tickets being bought, people standing in line (yes, that Annie Hall scene is in there), people taking their seats, buying popcorn, waiting for dates (yes, Mia Farrow in The Purple Rose of Cairo is there, too, as are, say, Michael Pitt and Eva Green in The Dreamers). Then there’s the snogging, the necking, the shuffling along; the arguments over seats, the annoying man in front (De Niro as Max Cady in Cape Fear). Oh, I can’t go through the whole thing – up to shoot-outs, drive-ins, jump scares, love scenes – but it’s an exhilaratingly smart, meta-textual, multi-layered, beautifully-sculpted ride through what makes watching films such a joy: exactly what we’re all doing at a film festival, right?

As for Joseph A Adsunloye’s White Colour Black, well, that was the most beautiful film to look at, stunning imagery of Africa and a very good-looking cast. The film has a certain charming innocence to it, as well, an openness that touches your heart and you can really feel the yearning and sense of soul searching at the film’s core as a young man seeks African heritage and identity after the superficial overload of life as London photographer. 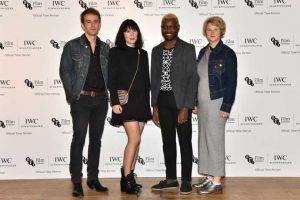 But Hope’s film has its own power and promise, too. After all, the award wasn’t just about the one movie, but the career next steps. You can tell from the performances of Ellie Kendrick and David Troughton that here’s a director with a compassionate ear for dialogue and family relationships, and real feel for what’s left unsaid. She also demonstrates an eye for environment and adversity – her landscapes bleak yet cinematically beautiful.

So well done to Hope Dickson Leach – you can hear her with me on the radio on BBC Radio London on Thursday.

As for the evening itself, well “star-studded” is about right. Cate Blanchett was resplendent, Rob Brydon a lively host, Amma Assante sparkled with dress and wit, Liam Cunningham provided grizzled Celtic glamour and David Walliams sat with Edgar Wright giggling, although we did have a good “interesting fact” chat about Edgar’s recent surprise on-stage QnA with John Landis at a screening of The Blue Brothers.

And I sat with Barbara Broccoli while the Royal Philharmonic (yes, they’d even crammed an orchestra into the ballroom) ran through a succession of film tunes, from Star Wars, to Lara’s Theme, only to eventually alight on Skyfall, which clearly gave Barbara goosebumps as she recalled the first time she’d heard Adele sing it.

And this was not even day one of the festival, technically.

I think it certainly puts the IWC Bursary on the map as the LFF warm-up and I suspect competition, already diverse and difficult this year, will be even tougher next year. But like every film maker in the UK, when £50,000 is up for grabs along with a prime LFF slot, all one can say is: bring it on.