Opening night was fun, bit of red carpet posing then a swift and tidy opening section of speeches before we were plunged into Amma Assante’s A United Kingdom (pictured).

It was a very good choice for an Opening film – lots to talk about, a glamour quotient, a fabulously engaged film maker and a heck of a good story in the movie. I have to confess I didn’t love the film, for all its many glories. I felt the editing was a bit of a problem and it suffered from perhaps too much attention to political detail.

She loves a gathering of stuffy white folk blethering away, does Amma, as at the climax of Belle and here, with all kinds of ridiculous politician and patriarchal types (Jack Davenport in a feathered hat) mucking things up. Which is absolutely fair enough, but ultimately not very dramatic and Clement Atlee probably deserved a bit better than the one scene he gets here.

There. Had to say it, wouldn’t be much of a critic if I didn’t. That said, all perfs were strong and it looked great and the room loved it – you could feel the warmth and the laughs and the love. It’s a big screen and A `United Kingdom stood up very well and proud on it.

Off to the party then. Always a scrum of smiles and shoulders. Spoke to Rosamund Pike who told me she cried when she first saw the photo of the character she’d eventually play. Spoke to David Oyelowo and congratulated him on the boxing he does at the film’s opening. He said: “That was me auditioning for a part in another movie – you never know!” 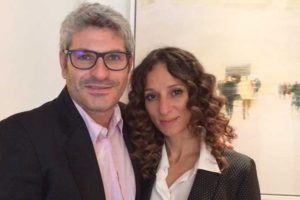 Me and Houda Benyamina

Then on to hanging out with Carol Morley, an exhausted yet elated Amma herself, and my man Paul Anton Smith, director of Have You Seen My Movie…? The debutant looked a bit overwhelmed by the whole thing, in a very good way. I have seen his movie and as you know, I loved it. And his parents in Canada now know this too, having received a Google alert about my review.

Probably stayed there a bit late – will I never learn?-  but still managed to up and about and interviewing the splendid French film maker Houda Benyamina the next morning. Her pulsating film Divines won the Camera d’Or in Cannes and now makes its UK bow at the LFF.

She is very lively company and we talked about her childhood on a banlieu in Paris as the middle child in a family of 13 and her influences and inspirations – Do The Right Thing and Mean Streets, it turns out. 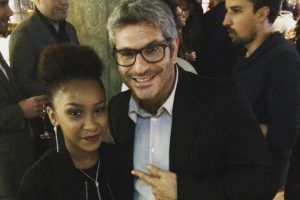 Sennia Nanua and myself at Screen International Stars of Tomorrow

Off to do my radio show on BBC Radio London after that with Robert Elms of course – you can hear it again here – and we were joined by Hope Dickson Leach, flush with her £50,000 winnings from the IWC Film maker bursary.

Then to the Screen International Stars of Tomorrow, where the young movers and shakers of the future were unveiled – damn them, with their youth, beauty and dreams.

It’s a great event in terms of all that youthful energy buzzing around. I met the delightful Sennia Nanua, the actual Girl With All The Gifts as well as Florence Pugh, who is so marvellous in Lady Macbeth, one of the best films at the LFF. And Arnold Oceng was there, sporting a very smart bag, fresh from his appearances in chart-topping Brotherhood and in opening nighter A United Kingdom. 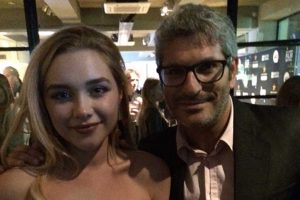 Florence Pugh and me at Screen International Stars of Tomorrow

Did I see a movie? Oh yeah, just had time to squeeze in a random one, Ten Years, a compendium film from Hong Kong, that wasn’t really great, sadly, but still had some very nice ideas about the future in it, including Brooklyn Beckham playing for Real Madrid.