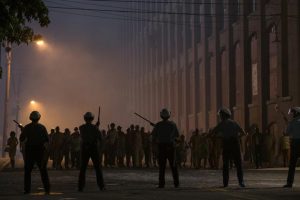 One of the year’s best, certainly most important movies, Kathryn Bigelow’s film of the 1967 Detroit riots hones in on an incident at the Algiers Motel in which three young black men died at the hands of police brutality.

This is powerful, incendiary stuff – particularly as it hardly feels like a period piece at all. Will Poulter turns proper nasty to play a bullying, racist cop, while John Bodega (featured image), in a brilliant turn that had me thinking of Denzel Washington at his finest, is our disbelieving eyes, playing a security guard whose uniform gives him some kind of pass into witnessing the insanity.

From a beginning which focuses on the riot’s beginnings, Bigelow intensifies the action into an hour-long stand-off in the Algiers which is soul-shaking in its intensity and outrage. British actress Hannah Murray also delivers her best screen performance, as a white girl caught up in the violence and detested by the cops for mixing with “blacks”.

Bigelow’s achievement is to keep the sense of social injustice burning while also bringing out the humanity of her characters, even the nasty ones, so we feel the real fear and fire of the riots – and, so immediate is it all, that we also feel how such flames of anger and division crackle on today. 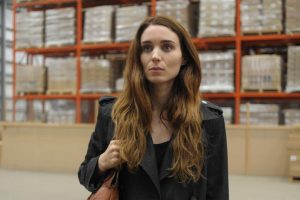 From theatre director Benedict Andrews (his production of Cat on a Hot Tin Roof currently has London a-buzz, mainly because Sienna Miller and Jack O’Connell are in the buff) comes this daring, provocative, yet nigh-unpalatable piece of cinema.

Rooney Mara plays a damaged young woman, Una, who goes to confront the man, Ray (Ben Mendelsohn), who abused her when she was 13 years old. It’s an extraordinary showdown, in an Amazon-style despatch warehouse, where both Ray (who’s done four years in jail and now changed his name to Peter) and Una are overwhelmed by the feelings that come rushing back to them.

The story fills itself in with flashbacks, which return in waves of fear and something like love. Thanks to the performances of Mara and Mendelsohn, the film remains heart-in-mouth watchable, although it’s never pleasant. Indeed, I kept wondering why on earth anyone would want to watch it. Psychologically believable though it may be, it’s still a very unfashionable plea for empathy with a paedophile and his victim.

Steven Soderbergh returns to big screen action after a weakly-imposed semi-retirement with one of the things he does best and most slickly – a heist.

This time, it’s a hillbilly version of the Ocean’s movies, set in West Virginia among the Logan clan, who think they’re cursed.

There are shades of the Dukes of Hazard here, with two hick brothers (Channing Tatum and Adam Driver) and their foxy sister in hot pants (Riley Keough). The heist involves syphoning off the cash from an underground system of pipes beneath a Nascar race track and also requires the elaborate springing from jail of explosives and vault expert Joe Bang, played with blonde crew-cut glee by Daniel Craig (pictured) with a smiley drawl (is it a case of James Bond now modelling himself on the Robert Shaw killer character, Grant, in From Russia With Love?).

The heist itself is carried out with smooth, swift cinematic economy even if I got lost a few times on the mechanics of it all. Hilary Swank turns up to investigate near the end and she’s as vexed as I was.

The accents are thick, so are some of the characters (isn’t it a trifle condescending?) but it would be churlish not to find the whole thing entertaining, although Seth McFarlane as an obnoxious British driver is hopeless.