Mine was a top table but a tough one.

At the magnificent Guildhall, the great and glamorous gathered for the BFI Luminous fundraiser dinner which acted as the curtain raiser for this year’s London Film Festival.

But it was also the night when the IWC Film Maker Bursary was being awarded and I was seated on a table with the three nominees. If I felt a bit nervous about it, I can’t imagine how they managed to eat anything of their very fancy dinner (fallow deer from the Balmoral Estate, no less). 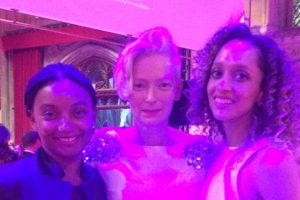 After the auction, which raised nearly £500,000 for the BFI’s Back to the Future campaign to inspire young film makers from all backgrounds, the big moment arrived.

Tom Hooper, director of The King’s Speech, was one of the deciding judges and he was tasked with announcing the winner.

Now, I’d introduced all the nominees a few weeks ago at BFI Southbank and talked to the selecting panel. The contenders all had their first films previously selected for the LFF – prize enough for many – but these three were now going on to contest for a prize of £50,000, which is more than the Turner, more than the Mercury and is “literally life-changing”, according to last year’s winner Hope Dickson Leach, whose film The Levelling went on to a great theatrical release and impressive reviews.

The nominees were: Daniel Kokotajlo for his film Apostasy, Rungano Nyoni for I Am Not A Witch and Michael Pearce for Beast.

I have to say all three films were very strong. Michael’s film Beast, set on his native Jersey, is extremely polished and poised for a first feature and has a great performance from Jessie Buckley burning at its centre. Just don’t let her on your golf course – she does more damage on the greens than Jordan Spieth.

Daniel Kokotajlo’s Apostasy is one of the rare British movies I can recall that wrestles with the issue of faith. Set among a community of Jehovah’s Witnesses in Manchester (Dan is himself a former Witness), it features a superb performance from actress Siobahn Finneran, a veteran of Corrie, Downton Abbey and Happy Valley but who was also Rita in Alan Clarke’s Thatcher-era sex comedy Rita, Sue and Bob Too.

Finneran plays a mother, Ivanna, torn between her religious devotion and keeping her family together in the modern world – her youngest daughter Michelle has anaemia, any medical treatment for which is strictly forbidden by the religion’s Elders, while her eldest, Luisa, has fallen in love with a Muslim boy at art college and has to leave the faith and have no contact with her family. 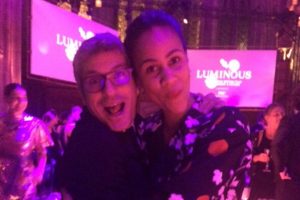 Me with Zawe Ashton

The tussle between secular and sacred is etched on Ivanna’s agonised face as she wrestles with all her beliefs. Structurally, too, Apostasy keeps us guessing, never quite knowing which of these female protagonists is the centre of the story. Given his own previous as a Witness, Dan keeps anger at bay and gives us a very fair, nuanced snapshot of the power of faith, for good and ill.

Also telling an outsider story is Rungano Nyoni’s extraordinary I Am Not A Witch. This film had previously enjoyed success as one of the rare British selections at Cannes, in Director’s Fortnight, and it again underlined to me its uniqueness, using startling African imagery and sounds, to tell the story of a young Zambian girl shunned by her village for being a witch and – on pain of being turned into a goat – sent to live in a commune of similarly accused and cursed women who are forced to wear yoke-like harnesses, bound by white ribbons, and who become tourist attractions. Yet it’s also very funny, particularly the hapless policeman.

Nyoni was born in Zambia but raised in Wales, and she’s obviously a hugely promising film maker with this mix of heritages and stories in her blood.

All three have the detachment of “outsider” movies, but here they were, at the poshest of dinners and at the heart of the Brit film establishment. I hope they don’t go on to make mediocre costume dramas and dull heritage telly.

Wow. I’d been sitting next to him all night and he’d been a guest on my radio show last week (listen to that interview again here).

He was so stunned. So were the others, who practised their best losers’ faces and all hugged Daniel warmly but it must have been so, so hard. 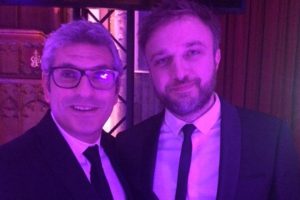 Me with winner Daniel Kokotajlo

Daniel gave a lovely, winner’s speech: “I come from a place where it would be a dream to win such an award and stand here. I know what it feels like to have very little, I know what it feels like when people are not listening, it’s been a difficult journey for me on APOSTASY but once I worked out what I wanted to say then people did start to listen. A big thanks to the BFI and IWC for believing in me and for seeing that I have some talent. And to my brother who last week rang me and asked me to lend him some money, well, you can have that tenner now.”

The rest of the night must have been a blur for him – as you can see from my photo with him.

But I introduced Rungano to Tilda Swinton, and they had a long, hopefully inspirational chat – if it was anything like Tilda’s amazing keynote speech for the evening, then it would have inspired an army.

Featured image: Me with Daniel Kokotajlo and Rungano Nyoni.