And you get a chance to win the film too……

On the podcast, the great Sylvia Syms OBE joins me to talk about her 1959 youth quake movie Expresso Bongo, which is now getting a beautiful restoration on DVD and Blu-ray in Dual Format Edition as part of the BFI’s cult Flipside label.

Flipside is the BFI’s label that brings back films that have slipped through the cracks of cinema history. All films are released in top quality editions, remastered to High Definition, on DVD and Blu-ray, with special features and an illustrated booklet. 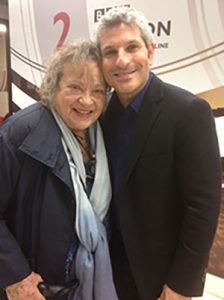 Me and Sylvia Syms

Expresso Bongo looks wonderful again – and sounds it. It was adapted from the stage show by Wolf Mankowitz and directed for the screen by Val Guest, whose camera roves around old Soho with a serpent-like quality. Star Laurence Harvey helps with his slithering portrayal of talent agent Johnny Jackson, with his bag of salt beef sandwiches and his barrel-load of chutzpah.

Sylvia Syms took the film role from Millicent Martin who’d played stripper girl Maisie in the stage show and gives her a lot of heart amid the twilight world of Soho clubs, where compassion wasn’t a real commodity.

Cliff Richard is the boy being made into a star on the Expresso circuit, in coffee bars from “Croydon to Willesden” and the film now stands as a monument to so much lost culture, from the delis and deals of Soho, to the fear of delinquency, moral panics, teenage rebellion, rock n roll shock and unreconstructed chauvinism.

I love Expresso Bongo and it’s still both quaint and cool, as well as beacon of British beat movies. Win it – on DVD and Blu-Ray and the great extras of outtakes, docs and shorts – in our exclusive competition, thanks to BFI. And hear Sylvia Syms remember it and her extraordinary career on the podcast. To win just simply answer this question:

In what year was Sylvia Syms born?

Send your answers to: competition@jasonsolomons.com

Get with it, you squares.

Competition closes on Friday 6th May at midday.