Garth Jennings was one half of promo whizzes Hammer and Tongs, who did such iconic videos as Blur’s Coffee and TV, with that milk carton, and Fatboy Slim’s Right Here, Right Now, encompassing evolution in about three minutes. 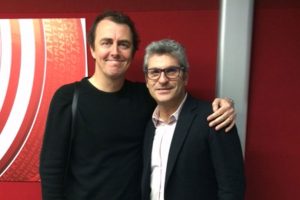 Me with Garth Jennings

After the cult success making A Hitchhiker’s Guide to the Galaxy, it was followed by Son of Rambow, a charmingly lo-fi story of a boy making home videos during the visit of a French exchange group.

Jennings has now done his own French exchange, moving his family to Paris to make Sing, for the Paris-base Illumination studio, where the Minions come from.

His sweet-natured, loveably frenetic and slightly bonkers, 65 song-heavy animation opens in the UK this week. If you want to hear Sheep, Gorillas, Pigs and Porcupines belting out hits from Elton John to Katy Perry, you can watch Sing, and if you want to hear me and Garth catching up on family gossip while I find out just how you direct a major animated movie, that’s all on the podcast.