They gave me a huge tent called the Cinedrome and I filled it with people watching movies. It was like dreams within waking dreams, a programme of 24 movies over four days and nights, shimmering on a huge screen while the light and sounds of the rest of the festival seeped in.

Covid rules meant that the sides of the tent had to be open this year, but that allowed people to wander in and out, to sample the films and be drawn in, making it a living, breathing part of the festival, part of the conversation of music and sound.

I put on a lot of music docs – from White Riot and Crock of Gold, to Poly Styrene and Jazz on a Summer’s Day – and these worked a treat. I was thrilled by the crowd for Lady Boss: The Jackie Collins Story who lapped up the camp bitchiness pouring from sister Joan. Night of the Kings, set under a full moon in an Ivory Coast prison, and Gagarine, set under the moon on a condemned Paris housing estate both looked wonderful – I introduced these films to a smallish crowd and by the time I returned, the house had doubled, people dropping by intrigued by the images they could glimpse as they trudged by.

The gorgeous Mandabi, from Ousman Sembene, was a hit, looking amazing in its restoration and chiming perfectly with the village atmosphere of a self-contained festival. Documentary The Great Green Wall also hit the right notes of music and conservation.

If I was nervous about a few films working, the packed crowd for Welsh dark comedy The Toll was a particular thrill, even if my star guest for the intro didn’t show – Game of Thrones star Iwan Rheon had to excuse himself a day later having got too much into the festival spirit. Actress Annes Elwy also didn’t make it up from Cardiff but I had the writer Matt Redd and Gwynneth Keyworth, who played all of the rampaging triplets.

The film played out beautifully in that Saturday night setting, even while Welsh hero Gruff Rhys played his set on the main stage thus creating a whole new soundtrack for the movie – all the more magical, if you ask me, though not easy to hold a Q&A afterwards.

Irish director Cathy Brady also joined me on Sunday night for Wildfire, which is a real cracker of a film but which suffered from a small audience as it was up against the Sunday night headliners Thundercat and Fontaines DC, Irish giants themselves. It’s such a good debut feature film, with might performances from the actresses playing the sisters and I think i managed to convince Cathy that she’ll never put on a screening of it quite like that ever again. Sensibly, we spent longer on the intro to the film before the bands started up.

The morning shows were equally important, if not more, offering succour for hungover parents with their wide-awake kids who run around the open space of the tent and sat agape at the animations which echoed the festival themes – Moonbound, Dogtanian, Ainbo: Spirit of the Amazon about saving the forest, and Horrible Histories: Rotten Romans, featuring feudal villages and Welsh stars Craig Roberts and Emilia Jones.

What I learned was that when you curate a programme, each film is special, like a child for which you have some kind of responsibility, and that introductions have a rare power to contextualise the film and make audiences tune into its vibe very quickly, knowing some key facts about it, or what to look out for or why it’s there at all, why it’s been chosen.

I’ve attended hundreds of film festivals but never had my own and this was a new form of excitement for me in over 25 years watching, exploring and recommending movies, to actually now watch people flock (or stroll, or trickle) together to gaze at images and to hear stories, as if round the flickers of a camp fire. We’d all spent so long watching screens at home, in isolation during the pandemic, that the sense of gathering and the unique communality of this Green Man Cinedrome experience was all the more palpable. It rather took me by surprise, how powerful that sense of curation and how proud I was when I got it all just right, the timing, the theme of the movie, the weather to go with it, the unfolding sense of narrative. I welled up several times, just watching people enjoy films, discover films.

I also spent hours compiling a film-related soundtrack playlist for the half hour gaps between the movies, one more oriented towards kids and families for the mornings and matinees (Disney songs, musicals etc) and a more mixed one for the evenings comprised of some of my Film Tune of the Week picks, songs from the films playing at the festival and just great soundtrack stuff from Giorgio Moroder, John Carpenter, Ennio Morricone and more. It’s a similar form of curation, I realised, selecting tracks as a DJ and getting an unfurling roster of films in front of an audience to chime with their mood. 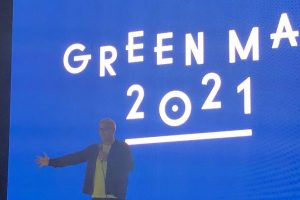 I’ve always felt that, as a critic in print or on telly and radio, that if you can touch one listener or reader and make them change their mind about something, or go and see a film they would otherwise ignore or miss or give a swerve, then one’s work is valid and worthwhile, honourable even. I had several people approach after Cinedrome screenings. One Welsh man in a woolly hat was a truck driver for all the heavy scaffolding and tents at the festival and he’d been on the road all week to the festival and back and forth and he was smiling on his way out of 1968’s Mandabi.

“That’s one of the best films I’ve ever seen,” he told me, wide-eyed. “I just had a couple of hours here before I have to set off again and I didn’t want to see any of the bands so I thought I’d give this a go –  I’d never normally see a film like that but it sounded good in the programme notes and it was just brilliant. Thank you so much.” My heart skipped. Mission accomplished

Another woman was with her kids and came over to thank me for Mandabi too. “We used to live in Dakar and it hasn’t really changed much,” she laughed. “But then as we were heading out, a Bollywood song came on the speakers, a real old favourite of ours and we all went a bit mad, dancing and wondering how is this even on here?”  I told her I’d picked that song, Chura Liya Hai Tumne Jo, from Asha Bhosle and Mohammed Rafi, must have been there just for that moment, just for her and her kids  – but with that, the whole point of being there, for her and for me, had just come together in perfect harmony.

I can’t wait to do it again next year – I’m already looking for the perfect movies. And the perfect songs.