With its four wins at the Golden Globes, there’s a suggestion that Three Billboards Outside Ebbing, Missouri is now the Oscar frontrunner. 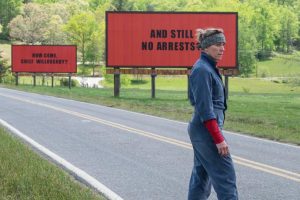 Certainly in the screenplay and Actress category, it must be, with Martin McDonagh’s fire-cracker script thoroughly deserving, for its willingness to transgress but never truly offend. The film’s heart is in the right place, and by that I mean it takes its cue from Frances McDormand’s performance and she’s magnificent as a wounded, proud, complex, vengeful woman. When I first saw the film at the Venice film festival last year, some of her speeches got cheers and applause – I can’t remember hearing that before, so all credit to the writing and the delivery. The character name of Mildred Hayes is destined for greatness, too, like her Marge Gunderson from Fargo (which won her an Oscar back in 1997).

I’m thrilled for Sam Rockwell, too, whose Supporting Actor win is perfect for his role, which truly lends light and shade to the whole film in a key role that adds to the overall tinderbox of what’s going on in Ebbing. Willem Dafoe is still clearly a possibility in this category for The Florida Project, but I feel Billboards now has the momentum.

Lady Bird is also a gentle threat, with Saorsie Ronan’s win in the comedy category, although Three Billboards is more laugh-out-loud, so I don’t know what that wasn’t in the comedy zone too. I like both films, though Lady Bird feels more like a lovely surprise Sundance hit than an actual Oscar winner, and for me Three Billboards has more about it. More swearing, certainly.

The directing win for Guillermo del Toro will please many fans, although he’s never been one of my favourites. The Shape of Water is fine as a doodle, and I like Sally Hawkins, Michael Shannon and Richard Jenkins but I found it a bit silly and broad and couldn’t really stand to watch Octavia Spencer in it.

That’s the category I’d like to see shaken up a bit. All white male directors there, and it doesn’t look good. At the Oscars, I expect Greta Gerwig to get a nomination, and maybe Jordan Peele, instead of Ridley Scott and Steven Spielberg.

And can we just say V for victory for Gary Oldman (featured image). His Churchill has been the only cert about awards season for some time now and, unless he puts his foot in it between now and March, I can see him marching off with the triple crown of Globe, BAFTA and Oscar, with a SAG on the side.

It’s a reward for a great career as much as it is for this performance, much of which is aided by prosthetics, yes, but also by Oldman’s signature physicality, his gait, his shoulders, his  barely-containable energy, the maverick spirit that’s been snarling inside and manifesting itself in on-screen characterisations since Sid and Nancy, Made in Britain and The Firm. Gary’s ascent from punk to Prime Minister is truly the great, most colourful story of this awards season, really, and he joins a pantheon of south London screen heroes with Charlie Chaplin and Michael Caine.

I have to say, though, that his Churchill performance is very fine on its own, too. It doesn’t work well in clips and short bursts, but it builds over the two hours of Joe Wright’s movie and Oldman’s subtlety comes to the fore in the to and fro, the struggle with the powers, the persuasion of rhetoric, the employment of charisma, the boldness of picking the right battle.

Most smartly, it’s a performance  – and a film  – that refuses to pander to the politics of this moment. Both Churchill – and to a certain extent Frances McDormand’s Mildred – create their own moralities and political spheres, personal rather than party politics. Such characters are all the more interesting in the Trump era, though both were conceived before such a thing was even conceivable. But both performances allow glimpses into the darker spaces of where such cult of personality and persuasion can lead.

So, is that it for awards season? No way. I expect BAFTA and Oscar to have different outcomes and line-ups, though Oldman and McDormand seem to me certain winners now. I expect Phantom Thread to feature more heavily and Dunkirk to fight back, while BAFTA are sure to swoon over The Post (those noms are tomorrow, Tues Jan 9) and give strong support to both Margot Robbie and Allison Janney (who won Supporting at the Globes) for I, Tonya.

And as for the ‘black’ carpet, what a relief to at last have a procession that was about something other than the dresses and nail-cams. The build-up over the years of inanity on these occasions has probably done much to lead to where we are now, with the women seizing the chance to be brilliant and bold. It’s powerful to watch, and much more interesting and the Globes got lucky by virtue of being the first big awards in the calendar. Everyone took their chance and seemed to seize the spotlight in just the right way, from honouree Oprah Winfrey to host Seth Myers. And congrats to him, by the way, on snagging the first decent, airable Harvey Weinstein joke – the one about him being back in 20 years, when “he’ll be the first person to be booed during the In Memoriam segment”.