Stephen Frears has made a fine comedy, that must be why he’s so miserable.

Of course I’m joking. “I’m a contrarian,” protested Stephen when the audience at the Everyman Hampstead complained he was being a bit gruff with me. They look out for me, the people at the Everyman, one of my very favourite cinemas in the world.

I was expecting it. I’ve known Stephen a long time and he’s a very fine man and we both moan about Arsenal a lot. As he’s actually from Leicester, he’s taking refuge in pride for his home town team this season anyway. 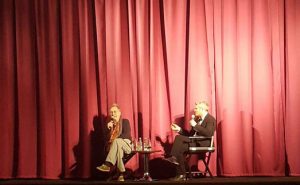 The director of Florence Foster Jenkins famously take little credit for his films. Certainly, his default defence is to deflect praise onto the great script or the wonderful actors. “Look, these people are grown-ups, very good at their jobs and it’s not for me to tell them how to do it,” he grumbles. Famously, Stephen only ever directs when a great script lands on his doorstep. He doesn’t write his own movies but when the good ones get dropped off by the postman in the morning, he gets excited. “There aren’t that many good ones, I assure you, or ones that appeal to me, that I think I can bring this together well,” he said. “All I have to do I to be good at my job, that’s what directing is.”

Stephen’s films range over every genre, from the gritty My Beautiful Laundrette (“Hanif Kureishi, the writer, literally dropped that script through my door, and that’s how I’ve been working ever since”), to the period splendour of Les Liaisons Dangereuses (“I had Barry Lyndon in mind”), the noir of The Grifters (one of my all-time favourites) to the pop of High Fidelity, to his “old lady trilogy” of The Queen, Philomena and now Florence Foster Jenkins.

Secretly, he chips away at the ‘auteur theory’, the French-led critical perception of the director as God, believing it is hampering British film both as an art and for audiences. “I’m anti-auteur,” he chuckles with mischief.

He’s more old Hollywood, with directors such as George Cukor and Howard Hawks on his list, those great orchestrators. “Don’t blame me for the vanity of other directors,” he blurts out and gives a cheeky ‘hush my mouth’ gesture.

It’s a remarkable career. Some films have been better than others and FFJ is up there with the good ones. IN my review, I wrote that he directs like he speaks and there’s a matter of factness to his storytelling. Everything is in service of the script. “Yes, because that’s my job – to find the best way to tell this story. If you surround yourself with very good people, then the best thing you can do is to not fuck it up. That’s my job, to not fuck it up.”

I say you could put that on your epitaph. Here lies Stephen Frears, Director and contrarian. He didn’t fuck it up. Yes, that’s about right.

In fact, such a good bit of antagonism does me good as an interviewer, keeps you on your toes – he’ll chastise me on stage: “Why would even ask that question of me?” he says. “‘Cos you’re sitting up here next to me and there aren’t any other bloody directors in the room, “ he even lets me reply. – But what he means is, I’ve asked the wrong question of the right man if I’m looking for whys and wherefores. But not everyone can get a good performance out of Hugh Grant. “Well, maybe he doesn’t get good scripts like this,” said Stephen. “That’s why he told me he’d do it – he rang me and said; I hate everything but not this, so I’ll do it.” And It’ll end up being one of the performances of his career.

Frears isn’t an auteur with a distinctive personal style, but he thinks like a storyteller and how best a thing should look. “I just see it as a job, a series of processes and conversations with very bright and good people. In fact, if ever I’ve tried to make a personal movie, the worse it has tended to come out.”

So it was a very lively and very revealing QnA after all and if you want to see more like and more fabulous films at the leading boutique arthouse cinema, then you’re in the right place. Just simply subscribe to my free newsletter for your chance to win one of two Everyman Memberships. Valid for 12months these lovely passes give you four free tickets, £1 off two regular tickets, monthly members’ events and 10% off food and drink – what could be better. Just visit the homepage and enter you details, it’s that easy.