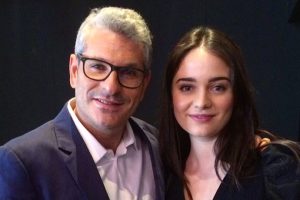 Aisling Franciosi and myself

For the second year running I was asked to present 10 rising stars of European cinema to the assembled press at the Berlinale. I’d met the chosen actors the day before, chatted with them and had some dinner, really getting to know their differences and their similarities. I watched a lot of European movies, too – particular accent on Iceland, Estonia and Scandinavia, this time. I got them all up on stage, showed clips of their work and asked each a few questions, so the audience and press could get to know them a bit too. 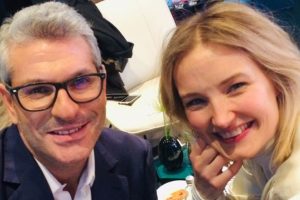 Me and Ine Marie Hillman

I also interviewed Jury chair Avy Kaufman, a very powerful New York casting director, about what she was looking for in choosing the latest crop.  Ireland’s Aisling Franciosi (star of Australian revenge horror The Nightingale) and Ine Marie Hillman (who plays Norwegian ice skating legend turned 1930s Hollywood star Sonja Henie in The White Swan) caught my eye as stand outs, and I loved the Macedonian film Secret Ingredient, starring Blagoj Veselinov. Lots of names to remember and pronounce and I was delighted to meet them all and get to know the new wave of European talent.