Dexter Fletcher may still be best known as London’s favourite child actor. From Bugsy Malone, The Elephant Man to Derek Jarman’s Caravaggio, Dexter was everyone’s favourite cheeky face, a sort of mate who happened to be on telly and in films. 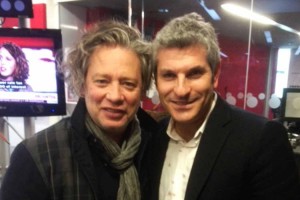 He was in the kids show Press Gang – maybe he’s partly why I became a journalist – and then grew up to be the Amis anti-hero in The Rachel Papers before presenting on telly, being in Lock Stock and then in Hotel Babylon. It’s a long but patchy career, always done with a smile and twinkle. Until he took up directing. I loved Wild Bill, his directing debut and his Proclaimers musical Sunshine on Leith somehow won me over.

And I’m thrilled – and relieved –  to see he’s done it again, directing Eddie The Eagle, filling it with characteristic heart and a great sense of mischief. I have to say, I wasn’t looking forward to Eddie The Eagle, but in Dexter’s hands, it soars, as well as crash lands.

Here, he joins me to discuss his new direction, Hugh Jackman and how to make a hero out of an underdog.

To read my review of Eddie The Eagle click here.