My trip to the Cheltenham Literature Festival started badly when I missed my train. The guard just wouldn’t let me on. “The door’s closed,” he said, leaning out of the window with his hand on the handle. “Well, open it and I can come in,” I said.

I had to wait two hours for the next train, which fortunately got me to Cheltenham in time anyway. I went to the nearest pub and watched the football. I just had enough time to catch Arsenal’s first two goals and ran screaming with joy and annoyance that I wasn’t at the game to see it and shout obscenities at Wayne Rooney, or someone. I just had to get the 1627 train. I missed Sanchez’s third goal but didn’t mind at all. Man Utd are C-words, too.

Anyway, let’s sell some books here, as Woody Allen’s Isaac Davies says in the opening montage of Manhattan, with which I began my presentation.

It was in the Town Hall, so a major venue and I was pretty excited that it was packed. Barry Norman was sadly ill and couldn’t make it – wishing him a speedy recovery – but I did have Tracy Ann Oberman in support, a terrific actress and writer who’s been obsessed with Woody for years.

We met another Tracey, the luminous Tracey Thorn, in the writers’ room beforehand, and she was on at 830, a rival event which, if I wasn’t due on stage at my own event, I would definitely have gone to see.

I kicked off with Manhattan and realised I then had to come on stage and follow that, one of the all-time beginnings in American cinema. Still, I got a laugh just mentioning it and I could feel the audience still tingling from the vanishing strains of Gershwin and those ephemeral fireworks above Central Park….

Tracy and I breezed through clips from Sleeper, Annie Hall (the cinema queue of course), more Manhattan, a bit of Purple Rose, some Hannah, a drop of Crimes and Misdemeanors, and we got so involved we had to skip Bullets, Sweet and Lowdown and Match Point. I brought it all back to literature – this was a book fest – with Midnight in Paris, where Owen Wilson has to work out how he’s back in 1920s Paris, dancing with the Fitzgeralds…

`I’m getting this one-man Woody tribute show down to an art, a slightly over-running art at the moment, but, you know, I’m getting laughs. The clips worked a treat and I think I did a decent job bigging up the book – Tracy was generous and referred to it regularly and said how fab it was, and what she’d learned from it…

We’d both feared we’d be the only Jews in the village, but Cheltonians and whoever comes to visit such things on a Sunday night from out of town, all seemed to allow us our kvetches and observations. Tracy had brought along quotes from her comedy pals and long time Woody fans Sanjeev Baskar and Omid Djalili to show that this wasn’t just for Jews, so that was good back up… 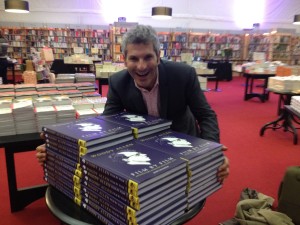 I sold a few tomes after, with a decent queue of lovely people wanting a signed copy (my scrawl is crap, so I do apologise) and it was a thrill to see such a big pile on a table figuring so prominently in the Waterstones in the festival site – it would be nicer to see that pile go down by the end of the week, but… I signed a few in advance if you’re heading up there, and some have even got jokes in  – Woody’s gags, not mine…

I did manage to stay the night, and had a surprise pleasure by getting nicely drunk in a hotel bar with Tracey Thorn (she’s very funny and extremely kind), legendary music journalist Mark Ellen (a bundle of enthusiasm and interest) and the lovely reviewer extraordinaire, Alex Clarke, whom I know from Observer days and Front Row and my own parrish of the Robert Elms Show. We mainly talked about Morrissey, from what I recall. And Prince. And how Alex had never seen a Bond movie. 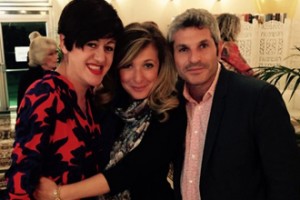 I like book festivals. I saw David Gower and Danny Wallace (not together) and I had a decent Eggs Benedict at the Queen’s hotel the next morning, I got the train back no problem, no C-words. And I sold some books.