Viggo Mortensen is at his most poetic and sylvan in Captain Fantastic. It’s not a super hero movie, but does question the nature of heroism – is this Dad who’s raising his six kids in a forest way “off the grid” doing right by them? 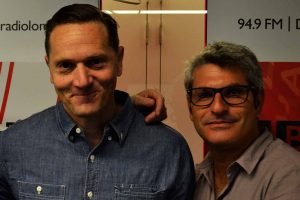 Me with director Matt Ross

It brings into question all sort of nature v nurture ideals, as well as mentioning Noam Chomsky and examining the choking ills of consumer society.

That the film manages it with a light touch, tight script and a smile on its face (it’s Little Miss Sunshine meets Into the Wild) is thanks to writer and director Matt Ross, who joins me on the podcast to talk about how his childhood influenced the film, working with the troubadour spirit that is Viggo, his own parenting skills and his life as an actor on hit sitcom Silicon Valley….