At the end, it was just too exciting for even Spike Lee to keep it under his hat.

The Jury President, responding to a badly-phrased question from the evening’s host Doria Tillier, let slip at the top of the ceremony that the Palme d’Or was going to Titane (featured image).

But it’s a great decision from Spike and his Jury in a year of no clear masterpieces, something by which to reset and recalibrate what we consider great cinema – because, no doubt about it, Titane is great cinema and couldn’t be anything else, pulsating with colour and indelible images, throbbing with sound and fury and gender fluidity and teetering on craziness. Wait til you see it.

And Titane was also emblematic of this comeback Cannes’ big theme: Sex. As we know, sex sells and it certainly got the glasses steamed up at this mask-wearing, pandemic era festival.

In testing times, it felt very much like there was a firm commitment to the big screen and to physical cinema, and it was physical on screen all right. I’m surprised they didn’t change the prize’s name to the Palme Ph’woar.

It felt like in practically every film, a woman or a man was required to get their kit off. It’s not something I usually complain about – let’s be honest, it’s partly why we all fell in love with European cinema – but the parade of nudity became a bit predictable, as if Cannes boss Thierry Fremaux had spent lockdown watching submissions in some kind of isolated, salivating frenzy. Felt a bit creepy, a bit old white man, that’s all I’m saying. Warming to their theme, audiences began making a list not only of topless scenes but of the remarkable amount of cunnilingus moments.

You know things are too sexy when you even get nudity in a Wes Anderson movie. The American auteur is one of the most unerotic, sexless film makers ever but his infuriating, patronising, doodling whimsy The French Dispatch featured Lea Seydoux in the buff and Timothee Chalamet in the bath. 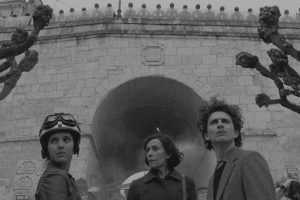 I really couldn’t stand The French Dispatch – it’s set in a town called Ennui sur Blasé and if you feel so bored and carefree about the whole thing as to make that your central joke, then I don’t know you bother with all your artistic little frills and details which add up to nothing, no story, no emotions. Other than ennui, which believe me, I experienced to the full.

Seydoux, who plays an artist’s model – and jailer – in the film, was slated to be the star of the festival, with no fewer than five films playing in the official selection. Ultimately, the Bond actress did turn out to be the perfect symbol for this edition, getting undressed in all her films but also testing positive for COVID and having to cancel her visit, thus depriving us of seeing her actually dressed up, for the red carpet.

To intellectualise for a moment, there was a point to all the sex other than titillation. This was a Cannes about connection, about a return to the physical, about people finding their way back to each other after months of isolation and confinement. Such was the joy in seeing people, seeing films together and mingling, one could be forgiven for wanting to cast all restrictions aside. It being July, rather than the usual May berth for the festival, it was also several degrees hotter, on screen and off, even if in the real world, we still had to hide behind masks and there was no kissing – I wondered, when will we ever again faire la bise?

Oddly, none of the films actually reflected or even mentioned the pandemic, despite quite a few being shot during recent months, under COVID protocols. So it was also a Cannes of denial, then?

Palme d’Or winner Jacques Audiard, whose A Prophet I made my all-time top European film a couple of weeks ago in The New European paper, was back in competition with a film called Les Olympiades, a black and white, bed-hopping tale of young Parisians in the titular late-60s housing estate in the 13th arrondissement.

It’s co-written by Girlhood director Celine Sciamma, so the pedigree and expectation were as high at the tower blocks in which the characters live and work. It’s a cool film, certainly, a multi-cultural reboot of the classic nouvelle vague relationship movies typified by Rohmer, Godard or even Jean Eustache, but didn’t quite hit the heights for me, despite luminous, sexy performances from Noemie Merlant (from Sciamma’s Portrait of a Lady on Fire) and debutante Lucie Zhang. I found it strange that these young people on screen didn’t mention lockdown at all as they took to re-connecting with naked élan. 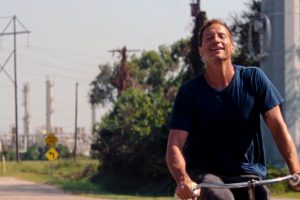 I liked Red Rocket a lot, another film shot in lockdown and featuring a speech about getting tested to work, because we’re talking about a fading porn star (played by real-life adult actor Simon Rex) called Mikey Saber returning to his oil-refinery Texan Gulf home town but trying to re-ignite his career with a pretty, young girl who works in a Donut shop. Director Sean Baker (The Florida Project) creates a wonderfullly bright, grainy aesthetic and I was hooked by Mikey’s reptilian, exploitative desperation while Trump’s 2016 rallies play on the TV screens, the American dream like pink icing and sprinkles, with a hole right through the middle.

The final stretch of the festival proved the most creative and fertile in terms of diversity of style. Iran’s Asghar Fahardi returned with the gripping moral thriller A Hero, about a man released from a debtor’s prison claiming to have returned a bag of gold he’d found but twisting himself and everyone else up into knots of dilemma. There was the body horror of Julie Ducornau’s Titane that went from garish and gory succes de scandale to absolute triumph, only the second ever Palme d’Or for a female director.

Memoria from Thailand’s Apichatpong Weerasethakul starred Tilda Swinton as a woman in Colombia drawn to a deep, echoing thunderclap sound only she can hear, a film of 20-minute long takes and karmic musings, a wholly unique and meditative experience that won the Grand Prix.

Contrast that with the energetic, youthful charm of Casablanca Beats, about a collective of kids at an arts centre in the Moroccan city, learning the history of hip hop from a former rap star and capturing a real flavour of young Arab Africa and all its political and societal issues. A heady hip hop mix of previous Cannes winner The Class and recent British film Rocks, and for pure enjoyment, it was my coup de coeur of the festival.

I thought Spike might go for this one, but in the end not many apart from me did. I really loved it, something fresh and something we’ll see at other festivals again, soon, I’m sure. The grumpy bloke next to me asked I could stop humming and tapping my foot. I told him Non.

Don’t forget to listen to my Seen Any Good Films Lately? Cannes podcast specials, including exclusive interviews with the Best Actress winner Renate Reinsve, Titane’s breakout star Agathe Rousselle and so much more…