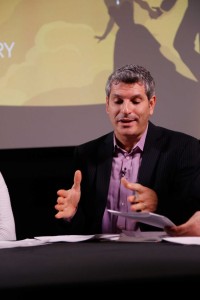 Watch me on the panel discussion as the nominations for this year’s EE British Academy Film Awards are announced.

The EE British Academy Film Awards will take place on Sunday 14 February 2016 and will be held for the tenth year running at the Royal Opera House, Covent Garden.  Sponsored by EE, and hosted by Stephen Fry, the Awards will be broadcast exclusively on BBC One and BBC One HD that evening, preceded by a red carpet show on BBC Three.