Charlie Kaufman’s Anomalisa is one of the strangest and most original films of the year. Even from the writer behind Being John Malkovich, Eternal Sunshine of the Spotless Mind and Synecdoche, New York, this is an unusual work.

Working with animator Duke Johnson, Kaufman has created a stop-motion masterpiece of modern alienation and banality, about a well-known motivational speaker (voiced by David Thewlis) having a terrible, depressed overnight in Cincinnati.

The film was Oscar nominated, but lost out in the animation category to Inside Out. Quite how you compare the two is baffling. 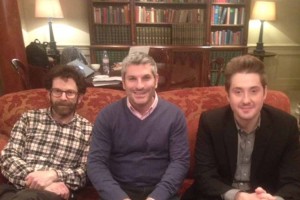 Fortunately, Charlie Kaufman and Duke Johnson came to the UK straight after their chastening Oscars experience and I caught up with them for a fascinating and lively interview about that big night in Hollywood, the making of Anomalisa, and the various influences behind Kaufman’s singular body of work…