Arrested in Thailand for drug possession, Billy is flung in jail with the most hardened of Thai criminals, all metal teeth and intricate full body tattoos. Cleverly, the film is mostly in barked Thai with no subtitles, leaving us as stranded and confused as Billy, who soon finds his fists are his way of survival amid the coded systems of drug smuggling and cigarette bartering. 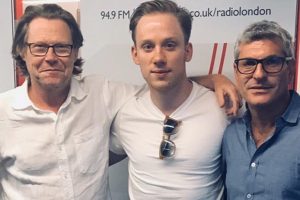 A Prayer Before Dawn star Joe Cole with me and Robert Elms – you can hear our chat with him here.

Shot by director Jean-Stephane Sauvaire with a mix of documentary realism and fetishised lyricism, the action unfolds in fluid, long takes, bloody ballets of fists and skin, a fairly relentless assault you can’t take your eyes off. Cole’s performance anchors it, an impressive display of fury, muscle and fear.

There are many superbly executed sequences, David Ungaro’s camera circling and panning around the prison, bobbing and weaving in the ring. It’s a study of combatting violence with violence, the Muay Thai boxing not as redemption but as survival.

What with Billy’s drug habit, his bruises, his terror, it’s a film that never allows you to relax, not for a second. You come out breathless, blinking into the light, if you’ve the stomach for it.