A day that starts with breakfast with Alan Yentob and ends with vodka shots with Liam Gallagher can only be had in Cannes.

Mr Yentob was on strong, defiant form at the breakfast for BBC Films, relieved at having helped the Beeb fend off the government and happy that ever-flourishing film arm, under the guidance of Christine Langan, has been given a remit to create even more distinctive films.

What’s best is the Ken Loach’s I, Daniel Blake is a BBC film – bet the Tories hadn’t seen that one before the White Paper…

I did hear there’s a move to show a 50th anniversary of Ken’s Cathy Come Home on the BBC as a double bill with I, Daniel Blake when that screens on the channel (BBC Two, I think) next month. I hope Ken will have his second Palme d’Or by then, because his latest is certainly a masterpiece.

The rest of the BBC slate looks appetising, particularly Julian Barratt’s comedy Mindhorn, Jim Broadbent in Ritesh Batra’s The Sense of an Ending (from the Julian Barnes novel) and Gurinder Chad’s Viceroy House. I still doubt anything will have quite the edge and power of an 80-year-old Ken Loach.

I went to see a very different version of Britain after that, in Steven Spielberg’s The BFG, in which a little girl Sophie (Ruby Barnhill, delightful) is carried off by a giant before having breakfast with the Queen.

There is so much charm and wonder here, it’s almost too much. Too many shots of people gawping. And I didn’t like the other giants very much. The effects are amazing, particularly the motion capture performance of Mark Rylance in the lead, probably the best-ever performance in this genre (sorry Andy Serkis, who was also at that BBC breakfast – he’s making a directing debut on Breathe, which isn’t mo-cap at all).

I thought maybe we’d had enough of Rylance, but he’s just wonderful here, deliciously murgling up all the language so it comes out wrigglish.

Oddly for Spielberg, though, The BFG is a bit rambling and baggy, not the best bit of storytelling – Penelope Wilton’s very good as the Queen, but it does all get a bit silly. I did laugh at the whizz popping Corgis, though. 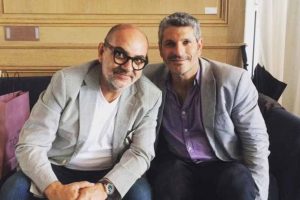 Luis Gnecco and myself

I went off to interview the creator of another magnificent Cannes performance in Luis Gnecco, the Chilean actor who is so good as Neruda in Pablo Larrain’s film. You can hear that on the Cannes podcast when I bring you that later in the week. Pablo was there too. “This film was hard work,” he told me. Well worth it, I told him.

Popped into the Doha Film Institute reception to find out what they’re doing investing in so many films – note to UK filmmakers: it’s a good place to get some finance, it turns out. There was no drink and I was the only Jew in the room, though, so I nipped off to Film 4 to welcome Daniel Battsek back to the UK and his new tenure.

It was a brief visit because I had to leave to go and see one of their titles, American Honey, Andrea Arnold’s third film in competition here following Red Road and Fish Tank, both of which won the Jury Prize.

She could well go one better with American Honey – certainly a Best Actress prize for her dynamite discovery Sasha Lane (pictured), who plays a teenage runaway Star who joins a band of roughneck magazine sellers in Kansas.

They travel around in a van, peddling their subscription wares all around the Mid-West, allowing Arnold to create the most unusual road movie. We see into many American lives, rich and dirt poor, and ponder the inscrutable inner life of Star, whose beautiful face fills the screen in microscopic close up (wasps, butterflies, turtles, flies, dogs, even a bear, also get their close-ups).

With little plot, you have to sift the meaning for yourself. There is a deeply felt metaphor here on capitalism, money and society’s divides, but also on youthful hope and a girl’s life just beginning. Very, very good, but likely to frustrate some viewers – which is, I’m sure, just how Andrea Arnold likes it.

Went off to a big Cannes party up a Villa right on the sea to celebrate.

Good one this, old skool Cannes – loads of beverages and good friends, and good lady DJs. Asif Kapadia and James Gay Rees were there, Michael Winterbottom and Liam Gallagher (wearing the most Cannes-inappropriate wind cheater thing).

Liam was there because he’s subject of Mat Whitecross’ latest, Supersonic, a doc about Oasis being produced by the lovely Fiona Neilson – delight to see her, as ever.

Newly-formed Lorton Distribution will be releasing Supersonic in October and this was a great launch pad. It left me with a sore head. I don’t have photos, thank God.