As you know, I’m an Arsenal fan, so a documentary about the single greatest moment of my life as a Gooner was always going to be hard to judge objectively.

So, I won’t. I loved 89. I loved that my great friend Amy Lawrence, the Guardian football writer, author and now producer, was behind the film and that meant I was a VIP guest, after-party DJ and my kids got to come.

The premiere was held ‘round the corner, on the Holloway Road and many of the prominent Arsenal lads from the big night at Anfield in May 89 (when Arsenal won the League with the last kick of the game and the entire season) were there: Tony Adams, David O’Leary, Steve Bould, Lee Dixon, (who exec produced the doc, too), Alan Smith, manager George Graham and, of course, the man who scored THAT goal, Michael Thomas.

Others there were Perry Groves, David Seaman, Ian Wright, Jack Wilshere as well as celeb Gooners such as Alan Davies and Nick Hornby. And me.

The film makers found the right balance of historical context – brick phones, C5s, Maggie Thatcher – and just getting on with the business of telling the story of that season, mainly developing the characters so that the viewer would eventually be invested emotionally in that defining moment at the end of the game.

It is superbly achieved, freezing the drama of the game, distilling time and history into a breathless moment, so that even now, nearly 30 years on, you still think Thomas might flick it wide, or that Liverpool ‘keeper Bruce Grobbelaar might stick out one of those wobbly legs and save it. 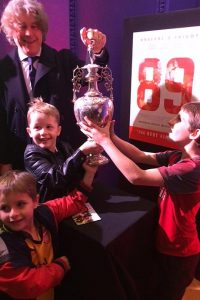 My boys with the old League Trophy and Alan Davies

I loved watching it with my kids, who’ve heard tales of the goal, but never seen it all in context before, nor really understood how history looks different (they’re 8 and 6). My oldest, Cy, was in amazement: “Daddy, the pitches were so muddy; but that’s a pass back to the keeper!; where are all the seats?” and most remarkable, his shock at the seeing players transfer fees listed in thousands, rather than millions.

Poignant reflection at the passing of time is this doc’s unspoken, lightly-worn, triumph. There is always, I think, melancholy in a perfect moment – knowing that it will never be repeated and that things might never be quite as thrilling again can be tough to take. It is the intrinsic nature of highs.

Watching Alan Smith and Paul Merson walk around the old Highbury Stadium, now converted into “luxury” flats, the old pitch an ornamental garden, was ineffably moving, a sign of London’s gentrification and co-opting of class histories. The film makes no clumsy comment, so forgive my quasi-Marxist reading, but it is heavily about the march of economics and power in history. 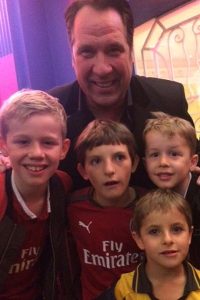 My boys and producer Amy’s kids with David Seaman

Contrasted with the Premiership now, all the Arsenal players were British, indeed mostly London, taking on the might of Liverpool, where most of the players were Irish, Scottish, Scouse. Both managers were Scots  – Kenny Dalglish for them, and our George Graham had been plucked from second division Millwall to manage the once-mighty Arsenal. Would that happen now, a lower division boss taking charge of the corporate giants that major clubs are now? George scoured the local regional papers (local papers, pink ‘uns, you remember?!) for football columnists’ tips on hidden gems plying early trade at teams like Stoke and Colchester, picking up Lee Dixon, Steve Bould, Perry Groves (£50k from Colchester) and Brian Marwood, to go with that London core of Paul Davis, David Rocky Rocastle, Paul Merson, Tony Adams, Mickey T and Nigel Winterburn.

Almost Lock Stock style, their older selves hang out in what looks like an old safe house, play cards and talk about the old days, but the camaraderie oozes through, bonds forged in adversity and in the white-hot glow of historical achievement. A couple of them, it’s true, are lucky to be alive, stories not really documented here because those tales belong to different books. No, this is about a team coming together, like a heist movie, a band off to nick the trophy from the hostile North.

But it’s striking what characters there were here, young, strong working-class men, who make today’s elite, academy trained polyglot athletes seem colourless and stale, particularly in this current late-Wenger vanilla age. You want every team member of the current Arsenal squad to sit down and watch this film to remember what can be achieved and what’s expected at the club. Steve Bould, the current first-team coach and assistant to Arsene Wenger was certainly there and I hope it hit home.

Would someone  who is not an Arsenal fan like it? I hope so. I watch a lot of sports films and docs that aren’t about my team, or even my sport, and the skill is always to invest the viewer in the characters, which this certainly does, thus making the “moment” itself about human emotion rather than mere historical detail. It’s not Fever Pitch, Nick Hornby’s superb, personal take on the year in its ground-breaking novelistic form, but as a nostalgic crescendo to a moment, to the climax of all football climaxes, 89 does it brilliantly, nerve-janglingly, tearfully.

Film over, and there was an after-party, in a venue I’d recommended and which, luckily enough , actually features in the film, glimpsed from across the street as the team bring the trophy home to Islington Town Hall in the euphoric aftermath. I wasn’t at Anfield, but I was certainly on those streets to welcome the boys back and to see the League trophy, a bauble I never dreamed I’d see in my life time. Winning the League was simply something Arsenal didn’t do, so it’s probably good to remember that now and calm the unrealistic expectations around the place now. Although of course, if this film shows anything, it’s that one can – indeed must – always dream. 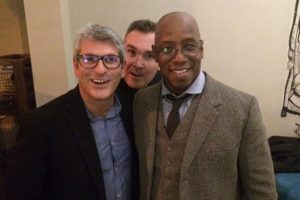 Me and Ian Wright, bombed by Nick Callow

Most of the players showed up at the party, and some of them showed they can still drink – and banter –  til the early hours. I was delighted to DJ, teaming up with my old wheels of steel partner Nick Callow, another football writer, who features in the doc, re-telling (again) how he was in the Southgate club Winners, that night, when all the players turned up, fresh off the bus back from Anfield.

We did a ‘back to 89’ set, of course – not pop music’s finest year and I’d forgotten how really terrible all that early, poppy proto-house stuff was, all those shoddy samples and rubbish scratching by bands like Bomb The Bass, and Coldcut and silly track names like Beat Dis and Rock Da House – all a bit embarrassing and dated now, now disrespect to those pop pioneers forging new ground.

But we definitely dug out some good stuff, tunes worthy enough to power us through three hours of exhilarating, legend-packed celebration.

Here are some of the best that which bridge that 88-89 season – these were soundtracking my youth: I was my university college DJ at the time and played a set the night after the night in question, and I know I played several of these – a few of them feature in the film, too:

The Only Way Is Up – Yazz

Miss You Much – Janet Jackson

Back to Life – Soul II Soul

Pump Up the Jam – Technotronic

And one corker that my man DJ Birdland Callow dropped into his set:

You can see 89 in cinemas (a crowd is thoroughly recommended) on www.ourscreen.com or on download and DVD.