They spent too much time looking back over 70 years of Cannes. There were a lot of old white people   on the red carpet and it felt stale. Meanwhile, while Cannes was looking to the past, the future blew in in the shape of Netflix.

The other looming future of course is Brexit. Last year on the Croisette, this was a just a silly word at which to scoff. Now it’s a solid lump of reality heading our way. I met so many people making plans to leave Britain – an Italian director, a Polish producer, a French editor. It’s heartbreaking, truly.

However, I’ve been very impressed with the BFI and their calm and measured response to the shit storm hurled their way. I’ve written a few doom and gloom pieces about how the British industry will be affected, but of course nobody really knows. We’re still far more in thrall to America than Europe and we’re still the biggest film industry in Europe and they can’t do without us.

I hear plans are afoot that shouldn’t result in too much change for the way the UK film industry works, particularly in terms of freedom of movement. Visa schemes or even a special “creative passport” could be introduced, lasting 3-6 months. But, you know, it’s not the same as nice creative types coming over to the UK to live, with their families and improving the mix of society.

Anyway, Jason, what parties did you go to? Well, there was the How To Talk To Girls At Parties Party, which I didn’t think I should attend as frankly the film is crud. And the band from the film even played at the party. I managed to miss most of that bit and stayed for some good dancing and mingling. Lots of industry were about, not so much celebrity. I did chat to one of the UK’s finest producers Andrew Eaton, who recently split with his long-time work partner Michael Winterbottom after over 20 years of awesome collaboration under the banner of Revolution Films, creating some of the most distinctive British movies – ones that even Cannes deemed worthy of inclusion, from 24 Hour Party People to Wonderland and A Mighty Heart.

Andrew has taken some time off and will, he says, be back with a few more projects.

I left my bag by the bar for a few seconds, only to find it whisked away. Thankfully, I found it later in the kitchens of the Magnum Beach bar. Undeterred by that lesson, I went on to the Grand for a gossip with producer Daisy Allsop. Three hours later, I got home to discover my phone was missing.

I resolved to go to sleep and think about that in the morning whereupon I fired up Find My iPhone to see the bleeping thing still at the Grand. I even went down there, looking among the chairs on the terrace to no avail. Asked at reception, no luck and scoffing looks at me. Asked at the bar, and there it was, newly charged up, beautifully handed back, mercifully unscathed. Say what you like about The Grand, that’s good service right there. Bravo, The Grand.

The next day I had a chat with Toby Jones (which you can hear on the podcast). He told me when he went to meet Michael Haneke for the part in Happy End, he was amazed to find Haneke had watched “all of my films.” “Even Dad’s Army?” I asked. “He might have give that one a miss,” conceded Toby. 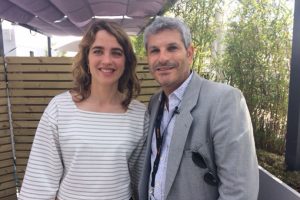 Adele Haenel and me

I also met the cast of 120 Beats Per Minute, who were great, particularly the two boys, Nahuel and Arnaud (pictured) who play Victor and Thibault, who spoke so sweetly about their hard core sex scenes. They all got to keep some of the outfits, too, they told me, and Adele Haenel proudly wears her pink triangle T-shirt around the house. 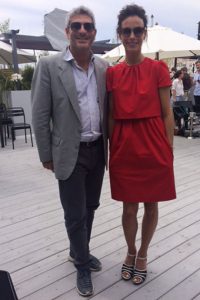 Berenice Bejo and me

Also down at Unifrance was the lovely Berenice Bejo, and we chatted about being the controversial Le Redoubtable. She and husband Michel Hazanivicius think they got away with their film – it could have been absolutely slaughtered at Cannes but its brightness and sweet performances won through. They’re very relieved. 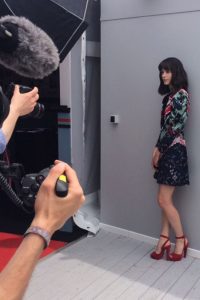 Stacey Martin poses for the press

Stacey Martin was there too, and I think her fragile performance has been underestimated. Here are some photos of my afternoon of French cinema.

Later I had dinner with Col Needham of IMDb, with regular attendee Nicolas Winding Refn, who is moving back from Denmark to LA again now that he’s written a TV series for Amazon he’s about to direct and show-run. It’s called Too Old To Die Young and stars Miles Teller as a LA cop entangled with the secret world of assassins.

We went to the Killing of A Sacred Deer party after that, where I danced with Andrea Arnold, who was in a very bouncy mood. She wore me out. Head of Film 4 Dan Battesek was there. He reckons all this Netflix thing is a storm in a teacup and that film makers want to see their movies on the big screen. This is good news for anyone heading to Film 4, although they do have their own small screen broadcaster attached.