Here’s a London drama about children, neighbours and property: all the stuff that gives middle-class Londoners palpitations. 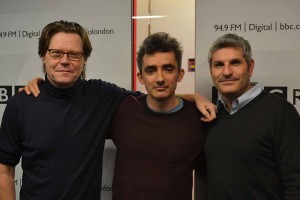 Its writer and director David Farr (also scripting The Night Manager on TV right now – he’s having a real ‘moment’) has talked about how there aren’t enough middle class films in Britain, something I’ve long puzzled over myself. You can hear David and me discussing it on my BBC Radio London slot on the Robert Elms show.

This one really works – Stephen Campbell Moore and Clemence Poesy play the couple upstairs, a nice couple, a publisher and a designer. Downstairs, a banker (David Morrissey) and his statuesque German wife move in, renovating nicely and doing up the garden.

Their taste isn’t quite to the upstairs’ liking and a bit of petty snobbery overheard leads to an escalation in buttoned down hostilities.

It all builds, despite both couples’ best intentions to be friendly, especially when both wives fall pregnant at roughly the same time.

A tragedy intervenes, driving a psychological wedge between these neighbours, cranking up into a full scale Rosemary’s Baby/Repulsion-type war.

Farr keeps it cool and edgy while playing on that sense of home and hearth at the heart of all British bourgeois, this little nation of homeowners and, nowadays, office workers and work-from-home  media professionals.

Morrissey is on great form, really menacing in his froideur – just a cock of his head is enough to set off alarm bells. Poesy, too, is expert at the frazzled neurotic, just as her compatriot Catherine Deneuve was for Polanski in Repulsion back in the 60s.

The Ones Below**** is Polanski for the Zoopla generation, a corrective to those of us who try to get everything perfect before our control freakery crumbles in the face of real life – hell is other people, said Sartre, particularly if they live downstairs.