Black tie on, I attended the 36th London Critics’ Circle Awards at the May Fair hotel, an event I used to chair myself and presented as host a couple times back at BFI Southbank. 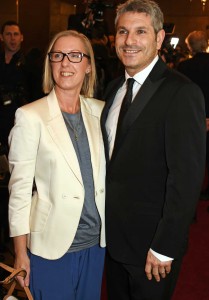 It’s something I always look forward to, even more so now my involvement is far more distant than in the days where I’d be literally on the phone to Harvey Weinstein while on the red carpet shouting at him to “fucking get Helena here or we give the award to someone else…”

Of such stuff is awards season made. And, we’re all still around and on Sunday I was honoured to be allowed to present the Attenborough Award: British Film of the Year, named after Richard Attenborough, of course. And I was delighted to hand it to 45 Years, such a terrific film. Tom Courtenay won Best Actor and Charlotte Rampling Best Actress for it, too, so it was a real thrill to see a film I loved win big. (Are you watching, BAFTA?)

The film’s producer Tristan Goligher was also there, a lovely chap whom I’ve know since he worked with the same director Andrew Haigh on their debut Weekend, to which we awarded Breakthrough of the Year  when Virgin Atlantic sponsored that award back in 2012, almost exactly four years ago to the night. I knew they’d all go far.

It was great to see Asif Kapadia getting a richly deserved win for Amy and there was a clever move, I thought, in giving Best Foreign Language movie to Asif’s close rival in the Doc category this year, Joshua Oppenheimer’s The Look of Silence. I still think Asif’s going to get the Oscar. How bloody exciting is that?

A lovely touch, too, was the dedication of the Breakthrough award henceforth: The Philip French award, named after my late Observer colleague. David Gritten gave a lovely dedication to Philip and revealed a small plaque with Philip’s name on which will now be nailed to his favourite seat, in Soho Screening Rooms, the one I mentioned in my appreciation of Philip the day he died. We shall thus remember him every week, with a nod and a smile.

Good auspices aligned, in front of Philip’s wife Kirsti and his three sons, Karl, Sean and Patrick, that this year the inaugural winner of the newly-named award should go to Beta Band member turned film maker John McLean for his debut Slow West, an homage to a genre Philip so loved. John, who sat in my row, was so chuffed, too, as he was a great reader of Philip’s work. And – fact of the week – John’s wife Kitty is a very gifted ice cream maker, apparently, a bit of conversation which greatly excited my own wife.

Elsewhere, I was rather amazed to see us giving Best Film and Best Director to Mad Max: Fury Road and its maker George Miller. Sure it’s a technical achievement to admire, if you admire that sort of relentless thing, but I found it one long headache with no plot, no humour and no particular soul. I prefer Duran Duran’s Wild Boys video, innit?

Still, there’s a lot of mysteriously in-sync critical love here and in the US for the film, which played Out of Comp at Cannes. I really don’t see how Mad Max is any different to Spectre, which is getting no awards love except for Sam Smith’s song, or, even, say, Star Wars, which is being limited to tech categories.

I recall one year when there was a bit of a FB campaign among critics to vote Jacques Audiard’s A Prophet not just Foreign Language film but THE film of the year. Which we duly did. No one was pressured, just gently attuned to the idea, so such is the way awards season can be skewed sometimes. Looks like that’s what’s happening with Mad Max.

Oddly, Carol, which led the way with most nominations and had most early critical admiration, only came away with the Technical Award, for Ed Lachmann’s cinematography.  I did fear for this beautiful film’s ability to actually turn admiration into full-on victories in such things as awards. It doesn’t quite burst into life at any point, remaining on a slow burn smoulder, which is really what it’s all about, after all – but that’s a curious disadvantage when the strange business of putting a voting cross in a box gets down to the nitty gritty.

Lovely to see Maisie Williams get our Young Performer award, I category I introduced to reward all our upcoming talent, and for which I thought her The Falling co-star Florence Pugh was equally deserving. The pair from Carol Morley’s intriguing film sat together in front of me and giggled a lot, and clearly had a great night, adding some youthful glamour to the occasion.

Kate Winslet was fab in her actressy way, getting us all up for a minute’s applause for Alan Rickman (“It’s been a tough week” she sobbed, “Al died, so can we all get up and clap?” We did) and then Dame Judi gave a great intro for Kenneth Branagh who, accepting the Dilys Powell award for Contribution to Film, gave a very smart speech about how critics have helped him and kept him in check and been useful. So that was nice.

Of course, all these lovely VIP people have now got a copy of my Woody Allen: Film by Film book which, courtesy of Carlton Books, went in the goody bags of 50 lucky winners, so I hope they like it – even if I’m a bit mean about Branagh’s performance in Celebrity, in which he does a Woody impersonation, and, you know, “Jews” up. Still, he’s a force for the good that Branagh, and has mellowed nicely and charmingly. And we were luck to have him along.

The full list of winners for the 36th London Critics’ Circle Film Awards:

BRITISH/IRISH FILM OF THE YEAR: 45 Years

FOREIGN LANGUAGE FILM OF THE YEAR: The Look of Silence

DOCUMENTARY OF THE YEAR: Amy

SUPPORTING ACTOR OF THE YEAR: Mark Rylance — Bridge of Spies

SCREENWRITER OF THE YEAR: Josh Singer and Tom McCarthy — Spotlight

YOUNG BRITISH/IRISH PERFORMER OF THE YEAR: Maisie Williams — The Falling