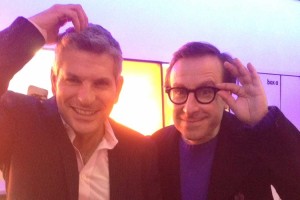 Top night at the Barbican to kick off my Woody Allen mini-season. To celebrate Woody’s career, I was joined by Simon Schatzberger who delivered his wonderful interpretations of Woody’s early stand-up routines, including, of course, the Moose sketch, which he does with such perfect timing and relish.

Warmed up nicely, I showed Sweet and Lowdown, which looked ravishing on the Barbican’s big screen, a restoration that has really brought out the hues of Zhao Fei’s cinematography.

It sounded so good, too, that plucked guitar from Howard Alden. Woody’s writing is lively and fun, the framing jazz mockumentary structure always witty and affectionate yet also gently mocking. Great cameos from John Waters and Anthony LaPaglia, too.

But obviously it’s Sean Penn’s belligerent yet comic performance (“I want a talking girl”) and the tender, angelic presence of Samantha Morton’s Hattie that soars above it all.

Samantha joined me afterwards and was on brilliant, candid and passionate form for the QnA. “Was it true you hadn’t heard of Harpo Marx when Woody told you that’s how you should play it?” I asked. “Yeah, but I didn’t really know who Woody Allen was either,” she revealed, laughing at her younger self. “And I didn’t even know Sean Penn was an actor – to me, he was Madonna’s husband.” 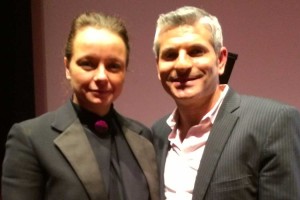 Sam talked us through her roles in Minority Report, In America, Morvern Callar, Control and Synecdoche, New York as well as her new one in the mini-series The Last Panthers, which looks very good. Her prime motivation? “I just don’t want to be shit, basically,” she confessed. Her main influences in acting? “Oh, easy, Gena Rowlands and Barbara Hershey.”

Of course, I say, both of them Woody alumnae, too, Gena in Another Woman and Barbara in Hannah and her Sisters. “Really?” said Sam, with typically honest incredulity. She mightn’t have realised it, but she certainly takes a deserved place alongside those two in the pantheon of great Woody Women and, basically, just great actresses. 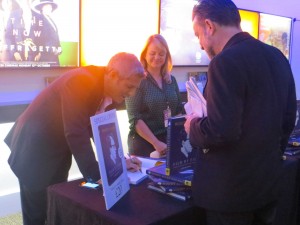 Thanks to anyone who also bought a book – hope you can read my scrawled dedications.

Doing it all again on Saturday, with a little personal presentation of my favourite Woody moments followed by a screening of one my – and Woody’s  – personal favourites, the wonderful The Purple Rose of Cairo.

See you there at 4pm in Barbican Cinema 2…