As Chairman of the Jury that selected the eight straight8 films that won a prize screening in Cannes (the grateful 8, maybe?), I could hardly miss the event itself.

And I’m so glad I made it down the Olympia cinema to join straight8 founder Ed Sayers and his enthusiastic gang. Ed has almost single-handedly kept Super 8 film alive these last 12 or so years, alerting Kodak to the growing underground love of their legendary celluloid format by creating his global straight8 competition.

This year, after a breathe of absence of a couple of years, they were back at Cannes with a bigger entry and profile than ever. Asif Kapadia (Senna, Amy, Oscar-winner, now making Maradona) and Ed Lachman (Far From Heaven, Carol, legendary DP) joined me on the Jury to sift through the entries and we whittled them down to these 8 whose prize was to be part of the Cannes programme.

Five teams out of the eight made it over, including one from Buenos Aires, as well as a former charcuterie butcher from Beaunes in France. 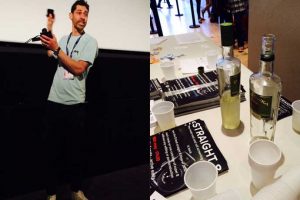 Founder Ed Sayers demonstrates the cartridge and camera style of straight8 and a very welcome drink – taken frozen and, er, straight of course

Ed served us vodka shots at the entrance, ensuring a buzz for the films which unspooled according to the strict rules of the competition – i.e., their makers had never seen them before. That’s right, they shoot them, with no cuts or edits, on one cartridge and send it in to Ed to develop, sending the soundtrack over separately. The first time they saw if it all worked – or not – was in Cannes.

I have to say the standard was incredible and the films looked a treat on the big screen. Standouts for me were Tortillas, fromm Jeff Zorilla in Bueno Aires, who showed us his amazing overlaying technique which involved breaking into the cartridge, rewinding it, and exposing various layers or covering up the lens with various cut-outs. The room was agog at the artistry.

Also stunning was Splendor in the Grass, by that former charcuterie master, Roger Batteault, who’d made a gorgeous study of wildlife – bees, insects, birds, a squirrel, shooting on a beautiful model of camera with powerful zoom lenses that were cooed over by the audience.

I liked the 60s public information film skit that was Social Networking Socially, by Paul Murphy and his comic collaborators, which had a nicely zingy script and some neat visual retro ideas, such as walking along the street swiping one of those old Apple Mac screens.

I should mention them all because it was hugely enjoyable to watch them all again, particularly in the company of their makers and their peers, who all clearly appreciated each other’s dedication and invention. I really was quite blown away by it, and there were some Kodak reps in the house too (their generous prize included film stock and developing) who were clearly energised by what they saw and admitted how it really gave them encouragement to keep the Super 8 production going.

Have a look here at some images and footage from straight8 (including some of the entries I didn’t mention). And to find out how to be a part of this growing underground film sensation – and maybe how to get a film into Cannes next year – go to www.straight8.net. I should mention that three of these will also air on Channel 4’s Random Acts strand, so it could be the start of something big for anyone.