Cinema needs its stars. It’s what the big screen has stood for since the silent era, after all, and the 74th Venice Film Festival lined up the legends for a nightly red carpet befitting the world’s oldest film festival.

Jane Fonda and Robert Redford were honoured on the Lido; Dame Judi Dench and Dame Helen Mirren were in stately attendance; silver-fox Venice veteran George Clooney sailed in, wife and twins and Julianne Moore in tow; Stephen Frears received a Glory to the Film Maker career award; 1970s mavericks William Friedkin and James Toback were welcomed, the latter in a wheelchair; and one of the best films was by documentary icon Frederick Wiseman, an acknowledged master of the form, still creating three-hour long movies in his 88th year. 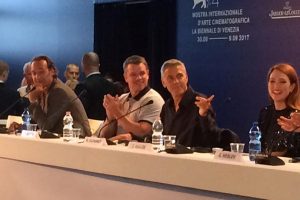 The usual crowds came to pay respects but a cynical soul – or simply a slightly younger one – could be forgiven for thinking the Palazzo de Cinema had turned into an old folks’ home (or as the Americans in West Palm Beach call it these days, a Senior Living Centre). I kept asking myself: has the art form that undoubtedly ruled the last century got what it takes to stride so confidently through the next one?

The irony was not lost (on me, at least) when director John Landis took to the stage in the festival’s second week, to introduce a restored version of and a ‘making of’ doc about his once ground-breaking Thriller video. Zombies and the undead stirring in the dark, indeed.

Cinema’s future is much in debate at festivals such as this – it’s surely their raison d’être. Out of Cannes last May came the furore about Netflix and other streaming services which threaten the fabric of the old distribution models. To its credit, Venice intensified the issue with a section devoted to the growing world of Virtual Reality film (VR), founding the first serious international film festival competition dedicated to this burgeoning form – and its practitioners – which has been prophetically labelled the ‘future of cinema’.

Landis himself was on the Jury for that section and admitted to me how VR will certainly change the way a film such as Thriller could be made. The viewer could be surrounded by the dancing zombies, even becoming part of the dance itself. 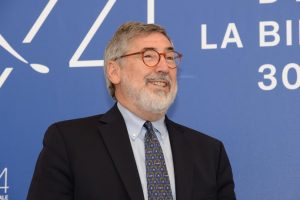 Yet for all the gestures of acceptance into the industry’s bosom, the VR competition was held on a separate island, Lazaretto Vecchio, once a leper colony and later a home for the unwanted packs of stray cats and dogs that threatened to overrun the narrow streets of La Serenissima. So VR was welcomed by the traditional film community – as long as it stayed quarantined in Lazaretto, for now remaining cinema’s stray.

I braved the short hop over from the back of the Casino to Lazaretto, and was astounded by what I saw and experienced there amid the crumbling cloisters and patched-up roof. Films and installations in which the viewer is fully immersed, as if floating in the same rooms as the characters, or surrounded by tropical foliage in the case of Taiwan’s Tsai Ming Lang’ and his gorgeous, languid  VR piece, The Deserter. (It was only four years ago that this unique film artist won the Jury prize in the main competition at Venice with his film, Stray Dogs.)

All around were people in headsets lost in their virtual worlds. Many were turning around slowly, tilting their heads to see or interacting with some invisible characters or creatures. While huge crowds pour into the cinemas of the main festival (PalaBiennale, Sala Grande, Sala Darsena), these VR films play to an audience of one.

Others present on the island included our own National Theatre’s Immersive Storytelling Studio (who knew they had one?) which, in collaboration with the National Film Board of Canada, created an extraordinary piece called Draw Me Close, written and devised by Canadian playwright Jordan Tannahill, that envelops the viewer in an animated space and combines live performance with active participation.

Telling the story of a mother dying of cancer, in just 11 quick minutes it takes the viewer in their headset on a journey back to childhood, Before I knew it, the animated mother figure – played by a real actress whom I couldn’t see but could hear and sense – was tucking me up in a virtual bed which I could feel, and singing me a lullaby. Coming out of that animated room, and taking off the headset was like coming out of the womb. Or therapy. So intense and emotionally visceral is the film experience, that Draw Me Close is game-changing; for some, it might even be life-changing.

All I knew was that the invention and sheer physicality of it made me feel the old movies over on the Lido (“flatties”, as one of Draw Me Close’s British producers jokingly, but justifiably, called them) felt in danger of being left behind.

Back over the water, I wondered where the new stars might come from, the new wave of filmmakers, or even a new Brat Pack of hot, rebellious actors? Not on Venice’s red carpet. The Nina Simone song Marriage is for Old Folks kept running through my head, with the word Movies instead. 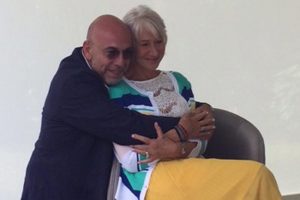 And then something amazing happened. I saw a film called The Leisure Seeker ★★★★☆.

On the surface it was almost one to avoid, a film for those Old Folks, a creaky old vehicle starring Dame Helen Mirren and Donald Sutherland as a long-married couple, Ella and John, making a final pilgrimage of a road trip from New England to Hemingway’s house in the Florida Keys, driving all the way in the titular creaky ’75 Winnebago. He’s prone to bouts of dementia; she has cancer. Their son (Christian Mackay) is horrified to find them not at home. He rings his sister: “Mum and Dad are gone – and so is The Leisure Seeker.”

You could practically smell the cheesiness. But, directed by Italian Paolo Vrizi, The Leisure Seeker has a redoubtable engine, It trundles on with growing charm and gusto, with heart and soul and Mirren and Sutherland milk it like the legends they deservedly are. There was nothing experimental or fresh here but it was old-fashioned road-trip cinema, beautifully judged, tender and twinkling with Janis Joplin and Bob Dylan on the radio. Suddenly, I found myself crying as I trembled and recognised my family, your family and all life (and death) was there.

And I came out, blinking back the tears into the late Italian summer sunshine and I thought: when the acting, the story-telling and the emotional currents are right and true, then yes, the good old movies have still got it. And they probably always will.