With heightened security, armed guards, snipers on the Palais roof and metal detectors, you got the feeling cinema itself was under threat as Cannes kicked off its 70th edition.

But it was the threat of Netflix rather than any terrorism that had the cinephiles quaking this year.

The streaming giant was all anyone was talking about and despite the old guard here insisting cinema had seen off many challenges over the years, from TV and home video, the Netflix model has them in a sweat.

It’s a confusing debate, really. Cannes boss Thierry Fremaux picked two productions from Netflix for the Competition, then realised he was in hot water with exhibitors because these films – Okja (pictured) and The Meyerowitz Stories – weren’t scheduled for theatrical release in France. 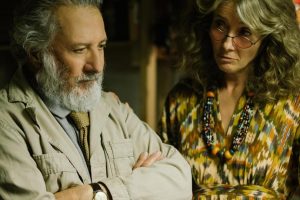 It’s a dull rigmarole, or it was until Fremaux then said that in future all Competition films will have to be released in theatres, and then Jury President Pedro Almodovar basically said no film not in cinemas would win a prize on his watch, which is all a bit unfair and unseemly for Jury boss.

And then, when Netflix’s film Okja ★★★☆☆ makes it debut, the technical team mucked it up and had to stop the screening, allowing a packed Palais to boo the Netflix logo.

The point is, the film was pretty good really, adored by many, although as you probably know, I’m not a huge genre fan and Okja is a bit of a creature feature, from the maker of The Host, Korea’s Boon Jong Ho. Still, it has plenty of texture and action packed in the story of a girl and her love for her pet ‘super pig” Okja, a GM modified creation invented by a nasty meaty corporation as the solution to world hunger. Okja herself is brilliantly realised and loveable – for me, it all gets a bit silly with activists in escapades and car chases, and Jake Gyllenhaal is uncharacteristically off mark in a comic performance.

Perhaps most interestingly, Okja is a sci-fi’ish curio whose immediate audience isn’t quite clear – if it went into a long theatrical run, it might tank on opening weekend. But on Netflix, it will surely find its fans (genre buffs, kids – it does get a bit horrific near the end – vegetarians, political satire fans – it’s a real, cult mix) and do very well with out the pressure of having to sell popcorn in Runcorn or Nebraska, or Rennes. And no projectionist can screw it up online.

Look, I’m a massive fan of picture palaces and I like watching my movies with a crowd, although even that’s a bit rich considering I get most of my films shown to me in private screening rooms in the company of film biz professionals.

But at Cannes, the Palais is a leveller and we’re all film fans worshipping the big screen so catch up with my quick round up of the stuff I’ve seen up there so only at jasonsolomons.com.