Parker Sawyers delivers a fine performance as young Barak Obama in the romantic film Southside With You, a film which follows Barak and Michelle Robinson on their first date on a sunny day around Chicago.

The date climaxes in going to see Spike Lee’s Do The Right Thing – but what did they do before all that? 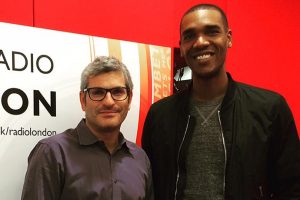 Parker Sawyers and myself

Playful, sunlit, talkative and charming, Southside With You is a special kind of film, languorous as a Linklater yet funky and fiery like a Spike Lee joint.

I liked it very much – there some great tunes in there, and beautiful art work from Afro-American artist Ernie Barnes, who captured black American life in scenes of sugar shacks, jazz joints, and family gatherings. You might know it from the album cover to Marvin Gaye’s I Want You album.

Well, says Parker Sawyers: “I kinda look like an Ernie Barnes character”. And boy does he ever, towering above me, loose-limbed and graceful as a gazelle. Here he is (he was born in Indiana but moved to London eight years ago, where he now has two Londoner daughters), talking to me about playing Obama, doing the impression and feeling the pressures of history. A truly presidential guest….