They cheered the MGM lion and they cheered when the pre-credit sequence ended and the Billie Eilish theme song began and every bike leap and every appearance of the tuxedo. 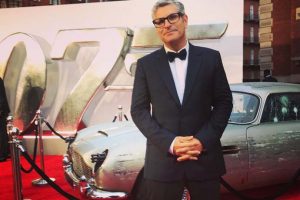 The black-tie, red carpet crowd at the desperately-anticipated world premiere of the 25th Bond film in London’s Royal Albert Hall could not have been more excited. Let into a slice of Bond-world glamour and, for many, back in a big cinema and big gathering for the first time in many months, they even roared at the end of the National Anthem, played in the presence of Prince Charles and his son and daughter-in-law.

Turns out this Bond is also a family affair, with familiar characters returning for a cinematic swansong to Daniel Craig’s 16-year tenure of the role and many of the regulars assembling on stage for a mass introduction, led by an emotional Craig and the producer/guardians of the Bond flame, Barbara Broccoli and her half-brother Michael G Wilson.

And while this Bond film certainly has all the familiar numbers, explosions and locations  – there’s little to beat in movies than the sight of an Aston Martin DB5 careering round a hairpin bend on a Italian hillside – it will be remembered for its emotional impact above all. And, for his final bow, Craig may well have delivered the most complex and layered Bond performance ever.

Much of the film is spent looking back, to past love Vesper Lynd (played by Eva Green in Craig’s first Bond outing, Casino Royale in 2006) while trying to move on with new lover Madeleine Swann, played by the returning by Lea Seydoux, her character name ushering in a practically Proustian Bond movie, one remembering time past and worrying about the future spent in retirement in Jamaica, always looking over his shoulder.

More traditional Bond fans may wish for the action to move forward with more pace – at 163 mins this is the longest Bond in the canon – and each set-piece, no matter how slickly delivered, has a certain hermetic quality, like a stand-alone episode, such as that pre-credit sequence in Italy’s Matera, or the visit to Cuba in which Ana de Armas shines as agent Paloma (more of her, please). What holds it all together is Craig, given some longer speeches and passages of performance the like of which I can’t recall a Bond previously delivering.

His Bond here is wrestling with mortality and facing the end of his usefulness. “You’re irrelevant,” says Ralph Fiennes’ M, dismissing Bond with icy bluntness. “And we thank you for your service.” No Time To Die is very much about relevance, its eventual cinema release after over 18 months of delays, being seen as the first big test of the theatrical model in the post-COVID era. Will it bring generations back into the cinemas? Even Prince William turned up with his Dad. 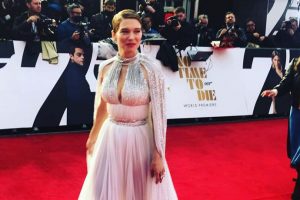 There is a risk that younger viewers seeing their first Bond may well be puzzled by the scientific helix of the plot, utter nonsense which nevertheless gives the always-welcome Ben Whishaw the chance for some hefty Q-splaining.

It involves the villain Safin, played by Oscar winner Rami Malek with a lizardly whisper to match his scaly, disfigured skin who, still upset about his mother’s death, is threatening the world with a deadly cache of DNA poisons – yes,  a film completed just before the real-life pandemic spread is about the deadly spread of infections, deadly germs in phials and bio-hazardous facilities. Although these are regular Bond tropes, it could well spook those looking for eerie conspiracies…

I won’t pretend the film doesn’t get confusing, indeed a touch irritating when folding back in on itself with the mind games and machinations of Spectre boss Blofeld, again played by Christoph Waltz, chained up in a top secret facility from where he can still run things with a bionic eye (it gets sillier, wait…). There were moments I wanted just another car chase or shoot-out rather than another loaded exchange of arch Bond dialogue and vaguely comic business. There’s a one-liner I even predicted about an hour before Craig delivered it. Maybe I’ve seen too many of these things.

But don’t worry, there is plenty of time for pyrotechnics – indeed, all the time in the world, as the classic Bond song title from On Her Majesty’s Secret Service has it, a line that gets quoted (verbally and musically) more than once.

This Bond’s excitements are all about character. I was transfixed by Craig’s craggy face and the emotions playing out on it and watching him crunch through the acting gears was actually more interesting than seeing him wrestling with that Aston Martin gearstick. Given the lack of threat inspired by Rami Malek and his ludicrous plot concocted on his ridiculous villain’s lair island, this Bond’s drama and jeopardy was in what would happen to its leading man, to this iconic figure. 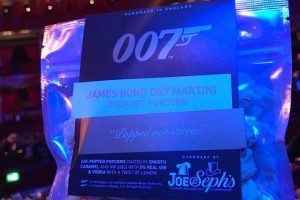 It’s about things that hurt so much more than cars and girls, as Prefab Sprout put it. So what could be possibly left to surprise the veteran Bond watcher? And that’s the elephant in the room here and in all reviews. For there are certainly a couple of huge shocks, emotional ones, ones that will cause more reverberations than even the biggest climactic Bond explosions. I think you’ll probably hear about it before you do get to see the movie, but it won’t be from me.

Let’s just say the audience would have stood and cheered at the end had many of its members not been a little stunned. Most Bond films you come out walking on air and thrilled – this one leaves you shell shocked with disbelief.

Suffice to say, then, that No Time To Die is Daniel Craig’s best incarnation of an iconic role, an iteration that sees Bond travel to emotional spaces the character has never been on screen, at least not since On Her Majesty’s Secret Service or in certain passages of Ian Fleming’s books. You feel all the wear and tear on Craig’s body and face, all the strain on Bond of having to save the world one last time (again) yet also all the tantalising freedom of someone approaching the finish line, the end of a long and exhausting run.

Maybe you don’t want your Bond like that. This guy’s an anti-hero, a bully, a bit of a thug and a egomaniac. He can’t deal with the world changing around him, with woman taking over or being better, he can’t cope with new niceties and new rules. He’s oafish with his feelings and deadly with a gun. Do we even like this man? It’s hard to root for him, were it not for the fact that he holds the world’s future in his meaty hands.

Where will No Time To Die rank in your all-time Bond list? That’s for pub arguments and inter-generational family dinner squabbles – these things take time to settle and find their place, but in the first adrenalised flush of being among the first in the world to see it, I’d happily stick it straight into the Top Ten. It’s not fun or gleeful or joyous at all, although at times it looks like it’s straining to be. It’s tough and sexy and grim sometimes, not always an easy mix of action and emotion.

But Craig has surely settled the arguments that surrounded him when he was announced as Bond back in 2005 and cemented himself as a singular Bond, taking on one of the great roles in film history and, with this final, career-defining performance, doing something unique and unforgettable with it. Whoever’s next has got one hell of job on their hands.