They Shall Not Grow Old

They Shall Not Grow Old – Peter Jackson’s recreation of the First World War sits here on its own, in a defiant category – I saw it both on the big screen and the small, when it premiered at the LFF as a gala. The first time I caught it on the big screen, it was in 3D, which felt unnecessary and indeed the bulkly glasses hindered more than enhanced –  but then I caught it when it went out live on TV on Remembrance Day and it was more glorious, more colourful, the sights and sounds coming to the fore, the colorisation, the voice overs, the closeness one felt to the men, their cool-headed recollections, their accents and their unsentimental approach.

I’ve since read a few debates around it, saying that it wasn’t ‘proper’ history. Well, I have to take issue with that – it was proper cinema (big screen or small, I don’t care) because it put motion pictures up there with a clear narrative and emotional build, telling a story on a certain specific stage. It wasn’t the entire World War, just a muddy, brutal, senseless slice of it, that might have been forgotten – but it won’t be now. Jackson has sent the film to every school in the UK  and in New Zealand, I believe, because his family, like many there, were connected to the story, as the end credits so movingly inform us.

Indeed this film is an act of collective memory and an act of binding the collective conscience, so that we never play silly games with our youth again.

Here are my favourite 20 films counting down from 10 to 1:

10 American Animals – one of the most daring and thrilling films in ages, Bart Layton’s art-heist movie toyed with the disconnect between life and fiction, re-enacting a real-life attempted robbery of valuable artworks from an American university library. As heart-pounding as it was mind-bending, the film has pace and style, wit and shocks and plenty to say about peer pressure and the curse of being ordinary.

9 Cold War – Already a big winner at the European Film Awards, Pawel Pawlikowski’s beautiful, pained romance looks like an instant classic in black and white and electrified by the luminous defiance of Joanna Kulig in the lead. Dedicated to his own parents, the director finds an emotional resonance while keeping firm control and probes the mysteries of the human heart against a backdrop of equally unfathomable politics.

8 The Rider – Probably the biggest surprise of the year for me (other than A Star is Born being so much better than anybody thought it could) is this tender, majestic and brutal story of hard-scrabble Americana, the tale of a famous young rodeo rider, Brady Jandreau, struggling with life after an accident which puts an end to his competition days. Based on a true story and using real life characters, Chloe Zhao’s film has a stark beauty and some breathtaking scenes of man – and horse – against the environment  and the economy.

7 Blindspotting – I loved this freewheeling buddy movie from Oakland, starring David Diggs and Rafael Casal as childhood friends Collin and Miles, one black, one latino, lost in the gentrification of their home neighbourhood, all while Collin has to serve out the last three days of parole probation. It’s funny, sharp, violent, brilliant in places, bursting into rapped interior monologues about race and class, but mostly about friendship.

6 Widows  – Opening the London Film Festival with a wallop was Steve McQueen’s Chicago update of the old Lynda LaPlante ITV series about the widows of a bunch of crims coming together to pull of the gang’s last heist. Viola Davis is magnificent in the lead and McQueen keeps you wavering between arthouse posturing and sheer heist thriller bravado. It’s  complicated, imperfect but sleek and stylish and all the women are great in it, Elizabeth Debicki in particular.

5 Phantom Thread – It feels like ages ago, but it did come out this year and I still think about it. Daniel Day Lewis is prissily superb as Reynolds Woodcock, a 50s London couturier who meets a new muse (Vicky Krieps) much to the disapproval of his domineering business partner sister, Cyril, played by Leslie Manville. The style is glamorous yet reserved, the elegance a marvel and the stirring of creative passions a potent, poisonous cocktail. It felt like a classic after just the opening scene.

4 Heiresses – I can’t think of another film I’ve ever seen from Paraguay, so this is definitely the best, a wonderful, distinctly South American study of secrets and class in a well-off quarter of the capital Asuncion, where a couple of women, Chela and Chiquita, who live together in an old mansion are suddenly forced to sell off the family silver when the taxman throws one of them in jail. Separated, the pair begin different lives to survive, one becoming a lead character in prison, the other taking up taxi driving for the posh ladies of the neighbourhood and falling for a glamorous divorcee (Ana Ivanova). The performances are brilliant (Ana Brun and Margarita Irun, stage veterans who’ve, incredibly,never been in films before) and the direction from Marcelo Martinessi is delicate, sensual, mysterious, almost ghostly, slowly peeling back layers of privilege and politeness. 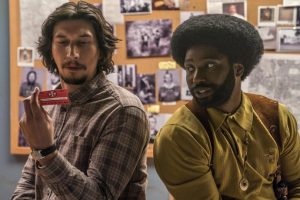 3 Blackkklansman – Spike Lee is back to his best form, which means to say there’s very few who can beat him. This is wild stuff from one of the most unique voices in cinema, and he gives it the full Lee treatment mixing comedy with political anger, satire, black power, cool  blaxploitation styling and great tunes. It’s all over the place, just as it should be, as John David Washington’s black cop Ron Stallworth and his white, Jewish partner Flip Zimmerman (Adam Driver) infiltrate the Ku Klux Klan, right up to the Grand Wizard David Duke, thus thwarting a bomb plot. Based on a true story from the late 1970s, it’s the way Lee brings it bang up to date that really socks it to you.

2 ROMA  – I’ve extolled the virtues of Alfonso Cuaron’s film for months, since seeing it at Venice where it deservedly won the Golden Lion. It’s a masterpiece of memory and movies, a black and white childhood memoir but shot through with an adult wistfulness, which is a powerful mix of emotions. Cuaron remembers his maid Cleo, but also his mother and his absent father, his house, trips to the movies, street riots. There’s so much packed in, all of it admirable, some scenes full of punches, other with touches of love. The point of view gets confused – is it the kid’s memories? is it about the maid? who’s telling this story? should we feel queasy about the class exploitation – but that’s Mexico for you, in all its corrupt, bruising, noisy wonder, and Cuaron pays it a heartfelt, cinematic tribute

1 Black Panther – I do hope it’s the game-changer it looks like, which is why I’ve made it my film of the year. Ryan Coogler’s blockbuster could come to define 2018, the year black broke into the mainstream. Even Spiderman’s black now. Even if that doesn’t happen, Black Panther is an assured classic, a proud and magnificent film, full of fights and jokes and thrills, chases and armies, invention and intelligence; the themes take in loyalty, responsibility, duty and identity with a smooth scope that’s almost Shakesperean. And yet it’s supremely cool, way the coolest superhero film ever – sexy and muscled, sleek and amazing, bending its Afro-futurism into something for every kid. I’ve never seen a film like it, nor a reaction like it, as it rose to huge popularity around the world. It was the film everyone was talking about, whole families discovering their heritage and their representation for the first time, all while the film itself just kicked ass in every aspect. Wakanda Forever, indeed.