So long have her influence and reputation been cherished by generations of cinephiles that it’s become a reductive cliche these days to refer to Agnes Varda merely as the Godmother of the French New Wave. She’s much more than that now.

At the age of 90, Varda has become the world figurehead for female film-making, a living, breathing, inspirational icon, still making masterworks and still a redoubtable force in cinema and in life.

She was nominated for an Oscar earlier this year, for her latest, highly original documentary Faces Places, made with the French photographic artist JR. Varda managed to stage one of the coups of the entire awards season: unable to make too many long-haul trips from her home in Paris, she sent a life-size (i.e. small) cardboard cutout of herself to the annual Oscar nominees lunch. The biggest stars in Hollywood queued up to have their photo taken with the icon of the icon.

By then, Varda had already become the first woman to receive an honorary Oscar – The Academy’s Governors Award – again stealing the show a few months earlier, in November 2017, by dancing a waltz on stage with Angelina Jolie who was presenting her with the award.

How has this tiny woman endured through six decades to become, right now, the name on every female film maker’s lips, emblazoned on every trendy Girls on Tops T-shirt, as sported by Greta Gerwig in a recent fashion shoot? And while the #MeToo and #TimesUp movements have taken hold, Varda has been at their vanguard, held up by the current generation as a symbol of indomitable fighting spirit and unique female vision.

Documentary maker Lucy Walker worked with Varda in April this year, bringing her to LA for a TED talk, now available on YouTube. “Agnes is a true artist,” says Walker, whose own, Oscar-nominated 2011 film Waste Land  acknowledges a debt to Varda. “She’s unrelenting in giving full power to her imagination, full freedom to her creation and that’s what shines through in her art.”

Just last month, Agnes joined Jury President Cate Blanchett to lead 82 women up the Cannes red carpet in a protest against the inequality of female representation over the 71 years of the world’s leading film festival. 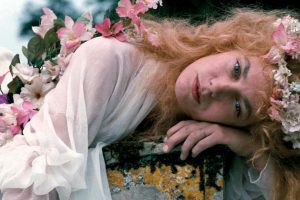 Jane B. for Agnes V.

Varda and Jane Campion are the only two women to possess a Palme d’Or and, as Varda herself pointed out when reading aloud the French translation of Blanchett’s speech, Campion’s was awarded ex aequo (shared with Chen Kaige) while her own was an honorary award.

It was Varda they all wanted to meet afterwards, stars from every generation including Jane Fonda, Marion Cotillard, Lea Seydoux and Julianne Moore crowding around the diminutive director. People are just drawn to her, says Walker: “I think that impulse to share through her work is a powerful secret to understanding her. Some filmmakers are excited to create, but it’s less connected to sharing. Agnes is sharing that inspiration and creation with us, always, uncompromisingly, which is why other artists respond so warmly to her.”

And the accolades continue, sparked by celebrations of her 90th birthday on May 30..

Varda is  currently being honoured with a two-month season at BFI Southbank, with weekends dedicated to panel discussions, “salons”, about her work –  and a selection of her films touring around the UK before she herself opens her latest, specially-commissioned work at the Liverpool Biennale from July 14. Titled 3 Mouvements, it is billed as a “three channel video installation” and will be accompanied by photography from throughout her career.

In truth, you may not have heard of Agnes Varda and it’s quite likely you’ve never seen any of her films. It’s OK to admit it. Compared to the films of her contemporaries such as Jean-Luc Godard (Breathless), Francois Truffaut (The 400 Blows) and even her late husband Jacques Demy (The Umbrellas of Cherbourg), Varda’s have rarely been given the exposure or credit they deserve.

“I have always been in the margins,” she told me. “But I am interested in people in the margins – squatters, gleaners, anonymous, courageous, workers, farmers, righteous people, gentiles who saved Jews in the War. I am go-between for stories, sharing them with audiences through cinema.”

But now is clearly the time to redress any Varda imbalance, with the UK release in September of the superbly empathetic and beguiling Faces Places (Visages Villages, in French) and the completion of an as yet untitled new film she’s calling “an unpredictable documentary” about her style of writing through cinema (or “cinecriture” – she had to invent the term herself). 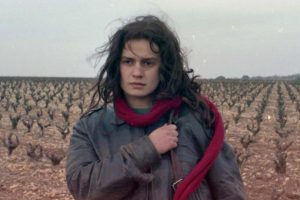 The BFI retrospective represents an exhaustive collection of her output, from her 1955 debut La Pointe Courte (1955), a love story set in a fishing village, and perhaps her most famous piece, 1962’s New Wave classic Cleo from 5 to 7, starring Corinne Marchand as a self-centred singer nervously wandering Paris for two hours while she awaits the results of a cancer test. Also showing is restored version of her 1985, Venice-winning film Vagabond, another film about a complex female character starring an extraordinary Sandrine Bonnaire as a free-spirited wanderer, travelling across the south of France, meeting a cross-section of society and a heart-breaking ending.

There’s the wonderful, creative memoir she made about her husband Jacques Demy’s childhood in 1991’s Jacquot de Nantes, and her many profound and playfully humorous documentary musings, including her portrait of Jane Birkin, Jane B par Agnes V; her deeply inventive recycling study The Gleaners and I and – my favourite – the personal memoir The Beaches of Agnes, looking back on her life and cherished places.

“She has always explored the various aspects of womanhood – motherhood, abortion, female friendship, beauty, ageing, just to mention a few,” says Aga Baranowska, who curated the BFI season. “And her female characters are so compelling, rich, ground-breaking and stand the test of time. At the same time, she has become an icon for female filmmakers herself because of her determination and perseverance in forging her own path.”

The bare bones of biography do not really do justice to Varda’s energy and reach. She was born in Belgium in 1928 and moved to the southern French town of Sete with her family during WW II. She studied at the Sorbonne in Paris, then studied photography and art history at the Ecole des Beaux-Arts, becoming the photographer at the newly-established Theatre National Popular in 1951. She met her husband Jacques Demy in 1959 and was with him until his death in 1990.

She was one of the famous five people who attended Jim Morrison’s funeral in Paris’s Pere Lachaise cemetery in 1971 and she is as much known for her distinctive personal style as that of her films, with her bowl haircut in two shades. “I was 19, put a bowl on it and cut around and I’ve kept it like that all my life. Maybe it’s fashion now, but it wasn’t. At least now it’s got two colours, like an ice cream of chocolate and vanilla!”

Mia Bays, a film maker and producer who is now Director-at-Large of the female focused Birds Eye View film festival, is a huge Varda fan. “It’s so wonderful to see this woman finally celebrated in the way she deserves. We have that cardboard cut-out of her in the Birds Eye View office. She’s our impish guardian angel,” she says.

Bays cites the quality of Varda’s work as the reason she’s such an inspiration for generations of women. “For me she was always one of the finest directors of the French New Wave but never got spoken of in the reverential tones reserved for her (male) counterparts, perhaps because she offers profound, essayistic observations about people, places and stories that are not usually in the centre of the frame. She was more experimental and ground-breaking than any of her contemporaries. 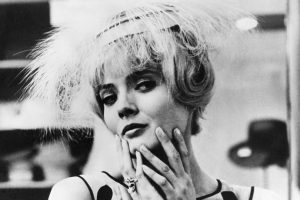 “Her spirit is indomitable, and there have been periods when she hasn’t made films but has been ceaselessly creative all the way through. Faces Places is a staggering film to have made at any stage of your career, let alone at 89. Vive la Varda.”

The BFI’s Baranowska agrees: “She’s curious about people, places, opinions and life in general. Playful and fun in the way she approaches art as well as life. Always experimenting, she shows creativity is a part of everyday life, and that inspiration can be found everywhere, even in the most mundane things and places.”

Working with her last year, Walker recalls how Agnes was a ball of energy, who became frustrated when the crew of 30-somethings broke for lunch because she had dozens of things to do.

“She wiped them all out, left them on the floor with her hurrying around and her constant ideas and inspiration,” says Walker, who believes it’s Varda’s willingness to take risks on new projects is why she’s still making masterful works at this late stage of her career.

“Visages Villages is another work of genius. Who does that at 89? She’s resourceful and has no ego about budget and makes what she can wherever she is, whenever she wants,” says Walker. “So she’s always breaking new ground, using simple tools like a mini DV camera, and humble subjects, like factory workers or a potato farm to create beauty. The Gleaners and I has inspired me more than any other film, though Cleo also takes my breath away every time, in every frame.

“Agnes shows us all the way – her mantra is: have passion about the world and a passion to master your craft in order to respond to the world in your medium. That will carry anyone, not just an artist, pretty far.”

Down at BFI Southbank, the Varda season is already underway. What will people learn from visiting some of these gems, either for the first time or anew? Says Baranowska: “It’s about he importance of opening up to people, approaching them with kindness, and listening to their stories with curiosity. The incredible warmth and humanity with which she approaches people is inspiring, and you can really sense that in her films.”

Faces Places, already a hit across Europe, sees Varda travel around France in a little van taking pictures of burly workers in country villages and industrial towns, then, with the help of street artist JR, blowing their portraits up to gigantic size, plastering the images on buildings, walls, lorries and trains, helping them thus reclaim the streets and towns, to own their space for a moment. 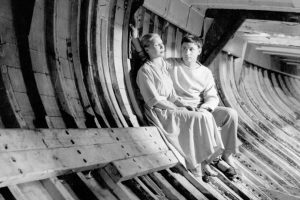 “I’m too small to drive the van,” she laughs about her filmic journey. “My feet don’t touch the floor, plus my eyes don’t see too well anymore. But I wanted to get away from the city, from the familiar places and be far from politics and chaos and the horrors of terrorist attacks and be honest with people.”

The result is a winning film about belonging, community, ownership and character, a film that bursts with humanity and optimism. “Modern life can be overwhelming,” she told me in Cannes. “But I believe the Italian political philosopher Gramsci. He said when you look at the situation you can only be pessimistic, but when you get into action you can only be optimistic – so I decided to take artistic action and trust in luck, chance, ‘le hasard’. It worked, the hope came and life happened.”

Varda’s life – and work – is still very much happening and a summer spent celebrating it is long overdue.

This piece appears in the current edition of The New European.

Agnes Varda: Vision of An Artist will take place from 1 June – 31 July at BFI Southbank and include Agnès Varda In Conversation on Tuesday 10 July see bfi.org.uk

For information on Varda’s installation at the Liverpool Biennal click here.

Faces Places (Visages Villages) will be released in September by Curzon.

A restored version of Vagabond returns to UK cinemas on Jun 29 and a touring programme of Varda’s films called Gleaning Truths will visit cinemas across the UK from July 27.