I’d heard a few negative things about Breathe before it opened the LFF on Wednesday night. But the Opener is never great, always a bit posh British, usually with something to do with Africa (The Constant Gardener,  A United Kingdom) rather than anything edgier or riskier.

It’s a big screen at Leicester Square and a big occasion and the film needs to be able to withstand the glare of a red carpet and the stares of many facets of industry, from corporate clients and sponsors, to old establishment figures – it’s not just for film critics.

So I go with open mind to these things, and more importantly, an open heart. Which is really what you need for Andy Serkis’ directorial debut, telling the story of the private family life of his own producing partner Jonathan Cavendish.

Cavendish’s father Robin was stricken by polio and given weeks to live, but with the resilient, matter of fact, practicality and huge love of his wife Diana, battled on through to live to see his son grow up, go on holidays and invent a wheelchair that gave freedom to thousands of severely disabled. 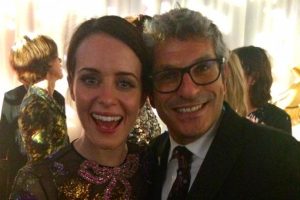 It’s a quietly revolutionary story, told with wonder by Andy and admirably performed by Andrew Garfield and Claire Foy – Garfield might be nominated for awards although I think the appetite to garland this sort of performance is waning. It doesn’t make it any the less impressive a feat of acting, just that, well, Eddie Redmayne got there first. Sorry Andrew.

Some may be surprised that Andy’s doing this  – but the story’s a very good one, elegantly told by William Nicholson’s script (Bill Nicholson, for god’s sake – one of the greats) and it’s actually all about transcending the physical restrictions of the body, something Andy with his acting and his Imaginarium studio has been pioneering for years – Robin Cavendish was just an early trailblazer for the same thing.

For all the posh Brits being eccentric and stoic and jolly in a big house that might make some people wince, there’s a lot of very fine direction and a sense of weightlessness that Serkis captures with real flourishes and one amazing, chilling scene. in a German facility for disabled, an image that will stick with me for years.

The film played really well and Serkis had the audience in the palm of his hand – like a proper director. Harsher reviews await, I’m sure, but I’m very glad I was there to see it.

Also lovely to share it with Andy whom I’ve known for years and his wife Lorraine (who makes a funny cameo in the film) and I congratulated both of them at the after-party which this year was a specially dressed BFI Southbank – which makes a lot of sense and worked really well.

Andy was delighted if a bit overwhelmed but Claire Foy was very happy to see me and if anything, hers is the best performance of the lot and she can certainly hold a close-up on such a big screen. 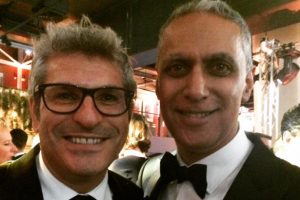 Me with composer Nitin Sawhney

Nitin Sawhney was there – he was an unusual choice for the score, perhaps, but he did a very graceful job with it where others might have been tempted to pull the heart strings. Nitin’s restraint and mix of world sounds worked beautifully.

Who else was at the party? Andrew Garfield, Tom Hollander, producer Andrew Eaton, jury President Andrea Arnold who’s always a hoot even if she and my wife had a heated discussion about star signs. Andrea’s looking forward to running her Jury and she’s promised me a dance when it’s all finished next Saturday, at the Awards.