Opening both the Venice Film Festival and the Oscar race, Damien Chazelle’s intoxicating modern musical La La Land***** has the power to transport and uplift.

I mean, literally – the opening number takes place in a classic LA traffic jam, when all the drivers leap out of their cars to sing Another Day of Fun. Chazelle sets his cinematic bar high from the off, shooting the whole sequence in one breathtaking shot, intricately choreographed to feature leaping dancers, singers and a Latin brass band playing in the back of a truck. As first scenes go, it’s up there with The Player and A Touch of Evil, and as traffic jam scenes come, it’s in the class of Fame, La Dolce Vita and Godard’s Weekend.

Such movie doffery is intentional – La La Land mixes the ingredients of a rich past to come up with something new. Out of the traffic eventually screeches Ryan Gosling, giving a blast of his horn and the finger to Emma Stone, who’s slow off the mark because she’s rehearsing an audition speech at the wheel. 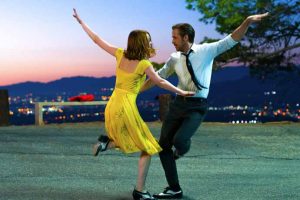 We follow her and discover she’s called Mia and that she works in a coffee shop on the Warner Bros lot. She lives with other wannabe actress flat mates and the next number quickly has them all getting ready for a night out, singing Someone in the Crowd, a tune dedicated to the bubbly hopefulness of meeting someone (a new lover, a producer who’ll make you a star) that infuses the start of every evening in LA.

The sunny optimism powers the film, although the smack of reality lurks a footstep away. We flip back in time to the traffic jam to see things from Gosling’s POV. He’s called Seb and is a moping jazz musician, depressed after a deal seems to have gone wrong.

Now he’s got a second chance playing at a chintzy supper club (run by Chazelle’s Whiplash star JK Simmons) where he has to play Jingle Bells. With shades of Jeff Bridges in The Fabulous Baker Boys, Seb can’t resist a jazz flourish, though, and Simmons quickly fires him. Mia has wandered in to the club to catch the final run of that tune and she is smitten, even though Seb barges past her. Will these two ever meet cute?

Sure enough, we’re at a party next and Seb is miserably playing keyboards in an 80s tribute band. The night ends with the most gorgeous duet high above LA. ‘You think you look cute in your polyester suit,” she sings. “It’s wool,” he counters, in between the beats.

She changes out of her heels and puts on tap shoes – just one of the many ways the film niftily incorporates modernity with the old-fashioned musical convention of bursting into song.

It would be cheating to borrow the film’s delicious flights of fancy. I’ll let you discover those for yourself, but the ebb and flow of emotions in this nascent love affair remains captivating and enchanting, as well as ultimately tear jerking.

Everything is in here, from Jacques Demy (Umbrellas of Cherbourg, Demoiselles de Rochefort) and Stanley Donen (Funny Face), then, to Gene Kelly in American in Paris to Rebel Without A Cause and the romanticised Woody Allen of both Everyone Says I Love You and Annie Hall (there’s an unforgettable scene at the Griffith Observatory, and we recall that Stone recently starred for Woody in Magic in the Moonlight, with a similar scene at the Nice observatory).

The two leads are simply adorable and look like they’re having fun when they’re dancing; they also look like they’re really hurting when they argue. They’re a Fred and Ginger for the 21st century – which isn’t to say they dance as well as them, of course, but they dance like people who know all about Fred Astaire and want to live, however briefly, in sublime moments like them. Don’t we all want life to be one long rendition of Cheek to Cheek?

I’m one of those people too. I soared, laughed and cried with Seb and Mia. I loved them and watched with gleeful amazement. I got that precious, rare feeling the director had actually made this film just for me.

As with Whiplash, there’s a good lot of jazz and Seb has to convert Mia to its exciting charms. And as with Whiplash, it’s also about trying to get everything to come together – work, life, love and dedication to one’s art and one’s dream. Does it all work out? That would be ruining it, but the film’s heart and soul cut through even any cold hard realities.

All the songs have been written by Justin Hurwitz  and the one that tinkles throughout as a refrain is City of Stars – as the lyrics (by Chazelle) would have it: “Here’s to the hearts that ache, here’s to the mess we make…”

A tale of love, what might have been, wishes and dreams, La La Land has it all, with songs. I predict Oscar nominations in every category (Linus Sandgren’s cinematography is superb, Mary Zophres contributes delightful costumes) an outpouring of love and a capturing of hearts.