I was honoured to host the launch of the inaugural IWC Film Bursary earlier this week. The swish watch company is pouring a top prize of £50,000 into British film and, in association with the BFI, the money will go to a director selected by a panel from among the first-time films in the London Film Festival line-up. It’s easily the largest prize on offer at any British film festival – in fact, it’s bigger than the Booker and the Turner.

So it fell to me to unveil the four nominees. They are Joseph A Adesunloye for his film White Colour Black; Hope Dickson Leach for The Levelling; Alice Lowe for Prevenge (pictured); and Paul Anton Smith for Have You Seen My Movie?

The diversity and differences among these four is very exciting and certainly says something positive about British film making, and all four film makers presented themselves to the crowd at NFT 3 with impressive clarity and charisma.

Their clips looked great on the big screen and the thought of £50k was clearly tantalising, the sort of life-changing amount that gives the “gift of time” to live and think about one’s next project.

Joseph’s film is about a London photographer who travels to Senegal to rediscover his identity. Hope’s The Levelling is set among the flooded farms of the Somerset Levels; Paul’s Have You Seen My Movie plays in the Experimenta strand of the LFF because it’s entirely comprised of clips (about 1000, he tells me) of movies, a collage about the film going and film watching experience – it certainly looks like one for cinephiles.

Of course, you may already know of Alice Lowe, an actress I’ve had on here before for Black Mountain Poets, and who was in Ben Wheatley’s Sightseers which she co-wrote with Steve Oram.

Her debut film Prevenge premiered at Venice where I saw it, loved it and caught up with Alice for an interview.

Prevenge is funny, dark and twisted, a tale of a heavily pregnant woman being urged to commit murders by the demon baby in her tummy. 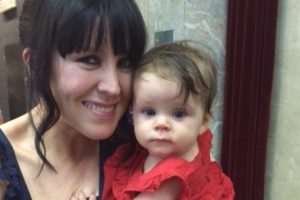 I’m about to watch all the other entrants, but Prevenge is getting all the advance buzz, mainly because of Alice’s burgeoning status but also because it’s really good and has a good chance of being a cult hit, as well as having a very cute backstory featuring Alice’s lovely little baby Della Moon, who was easily the youngest star of Venice this year…

You can find out more about the IWC Film Bursary here and of course see the films playing at the London Film Festival.

The IWC Filmmaker Bursary Award in association with the BFI will be presented on Oct 4 at a glittering ceremony, with the trophy and the £50,000 prize handed over by acting legend John Hurt.

I’ll be there reporting for you and making sure things go smoothly, of course…