Sonia Braga was known as the Brazilian Bombshell when she burst onto the international film scene in Kiss of the Spider Woman in 1985.

She was already well-known in her home country for TV appearances in hugely popular soap operas and the key film, adapting the famous Jorge Amado novel, Dona Flor and her Two Husbands, which had international success in 1981. 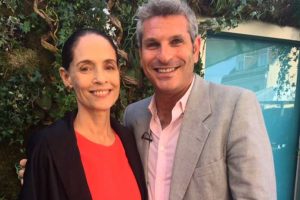 Sonia Braga and me

Braga moved to LA to make it in Hollywood, with mixed success, starring for Robert Redford in The Milagro Beanfield War and with Richard Dreyfuss in Paul Mazursky’s comic flop Moon Over Parador.

She dated David Lee Roth, Clint Eastwood and Redford, relationships which may have outshone her acting career.

Aquarius marks her return to Brazilian cinema and perhaps her finest screen role ever, a comeback which has clear emotional repercussions in this interview she granted me, at last year’s Cannes film festival, the day after her film’s emotional world premiere.

This interview first aired on US TV channel Cinemoi as part of their Cannes Film Festival Special. Thanks to Cinemoi and Minky Productions for their kind permission to share it.